"I didn't really know any scientists when I was growing up," says Emily Calandrelli. The West Virginia-born engineer first chose her career path for practical reasons but soon found herself enamored with the subject. "I discovered a world of possibilities and became obsessed," she says. Now, Calandrelli (@thespacegal) is sharing her love of science with the next generation.

In addition to hosting Fox's Xploration Outer Space and authoring the Ada Lace children's book series, she also has her own Netflix show for kids, Emily's Wonder Lab. "Science is interactive and joyful," she says. "It's about being curious and finding fun ways to answer questions." She also wants her youngest fans to learn that this field is for everyone. "I filmed the show when I was nine months pregnant, and I'm so proud of that representation," she says. "We didn't really address it; I just happened to be pregnant doing science. I love that kids can look at that and grow up with the assumption that you can be a mom and a scientist." 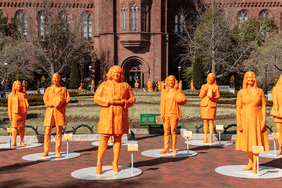