"I had this idea that came from when I was recording with the band down in New Orleans, and my daughters were very young...And there's always beautiful trees in the parks and New Orleans is a magical place," says Matthews.

Y'all, the man can do more than sing.

Mr. Matthews can make epic board games—see: Chickapig and 25 Outlaws. In partnership with his eponymous band, he recently donated $5 million to Charlottesville to help revitalize pubic housing in the band's birthplace. His collection of vino, Dreaming Tree Wines, is so divine even self-avowed DMB dissidents concede the guy behind all those carpe diem songs is onto something. And, yes, with an upcoming summer amphitheater tour weaving throughout the U.S., we assure you, dearest naysayers, the man can sing, too.

The Grammy-winning singer-songwriter, alongside celebrated children’s author, Clete Barrett Smith, has released a new children’s book, If We Were Giants, currently a #1 best-seller on Amazon in the children's environment books category. Yesterday, Matthews and Barrett Smith appeared on Good Morning America to talk about the illustrated tome, and we were happy to learn it takes its inspiration from the South.

"I had this idea that came from when I was recording with the band down in New Orleans, and my daughters were very young, they're 18 now. And there's always beautiful trees in the parks and New Orleans is a magical place," Matthews says in the TV segment. "I started fantasizing about this story about this girl that lived in the woods and lived in a sort of a natural environment, in some ways very different from NOLA, but my kids would be climbing in the trees so I started coming up with these stories and I would tell them bits and pieces and they would ask questions and over like a decade, I had this story," Dave continues, adding that he somehow landed a meeting with Disney at which point they suggested he write a book, to ultimately be turned into a movie. Matthews teamed up with Barrett Smith, and after much work, If We Were Giants officially landed on bookshelves and online retailers this week. Watch the full Good Morning America clip and check out the duo discussing the book in the DisneyBooks trailer below.

If Delia Owens' Where the Crawdad Sings met Maurice Sendak's Where the Wild Things Are and convened in Crescent City you'd have If We Were Giants. Find a tree house near you and get reading. 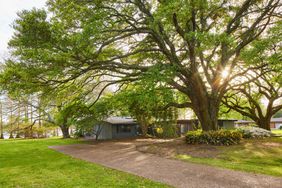