Watch the country trio compete in the season finale of America’s Got Talent tomorrow on NBC.

Country music trio Chapel Hart has the full support of their hometown as they head into the season finale of America's Got Talent this week.

Sisters Danica and Devynn Hart, along with their cousin Trea Swindle, make up the fan-favorite group. All three women hail from the tiny town of Poplarville, Mississippi. Poplarville, the county seat of Pearl River County, has the nickname "Blueberry Capital of Mississippi" and boasts a population of 3,000.

In a moving show of solidarity, the Pearl River County Board of Supervisors and the City of Poplarville have declared the week of September 11-17 as "Chapel Hart Week."

"Y'all are not gonna believe it!! The City of Poplarville, MS and Pearl River County made a resolution proclaiming Sep. 11-17 as CHAPEL HART WEEK!!!" the group announced on Twitter. "We are beyond honored and wanted to know how will y'all be celebrating (even if you don't live in Pearl River Co.)"

Chapel Hart's performance of their Dolly Parton- inspired "You Can Have Him, Jolene" during their first appearance on America's Got Talent back in July earned them a Golden Buzzer and catapulted them to stardom. In quick succession, the Mississippi natives shot to No. 1 on iTunes, heard from Parton herself, and received an invitation to make their Grand Ole Opry debut.

Chapel Hart is among the 11 people or groups competing for $1 million in the finale of season 17 of America's Got Talent, set to air tomorrow, September 13 at 8 p.m. EST on NBC. The winner will be announced the following day after a fan vote. You can vote on the America's Got Talent app or at nbc.com/agtvote. 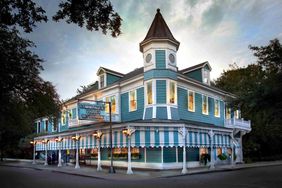