“Everyone deserves a roof over their head.”

Anthony Mackie is doing his part to help his fellow Americans on and off the screen. The Avengers star has teamed up with roofing company GAF to replace roofs damaged by last year's Hurricane Ida in his native New Orleans.

It's an especially meaningful project for the 44-year-old father of four. Mackie, who is currently portraying Captain America in the Marvel Cinematic Universe, grew up working for his family's roofing business in New Orleans.

"Growing up, I spent summers working on roofs with my family, so I know how important this work is to keeping families safe and building stronger communities," Mackie said in a news release. "Everyone deserves a roof over their head, and I'm proud to be working with GAF to give back to my hometown and ensure we withstand the next storm."

GAF has committed to installing 500 roofs throughout the Gulf Region, starting with 150 roofs in the 7th Ward of New Orleans. The effort is part of the company's Community Matters program, which has repaired or replaced 3,000 roofs since 2020. 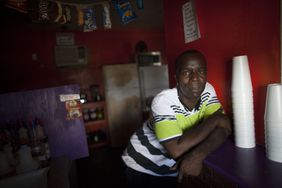