Let's hear it for Alabama weather.

A wise Alabama high schooler Anna Kate Warner recently wrote, "Loving you is like the Alabama weather / Storms or sun, cold or whatever / Will this pass or is this thing forever?" As Alabama residents well know, these song lyrics are indeed true with the ever-fickle nature of the weather in the Yellowhammer State.

Unfortunately, some threatening weather forecasts are impacting two upcoming drive-in concerts Alan Jackson had planned in Alabama on June 5 in Cullman, at York Farms and on June 6 in Fairhope on the grounds of Oak Hollow Farm. Though Jackson had announced these two dates for "Small Town Drive-In" concerts late last month as a clever antidote to the coronavirus pandemic upending live music tours this summer, the threat of tropical storms had other plans for the upcoming gigs.

Per Jackson's website, "...Alan Jackson’s 'Small Town Drive-In' concerts—planned for this week in Cullman, AL and Fairhope, AL—are being rescheduled for next week due to the weekend threat of tropical weather on the Gulf Coast. Jackson’s June 5 performance in Cullman will now take place next Friday, June 12. His Fairhope (Mobile area) concert will be held Saturday, June 13...All purchased tickets will be honored at the rescheduled dates."

For ticket holders, we guess that means it's time to order your "It's Five O'Clock Somewhere" or "It's Time for a Good Time" or "Livin' on Love / Buying on Time" face covering and stream some Jackson tunes to hold you over until the new performance dates.

To lift a line from Warner's timely tune, "The sun was hot, the skies were blue / I was living it up, the next thing I knew / You came in like a hurricane, but you'll be gone in a couple of days." Is that the truth or what? Stay safe, everyone, and here's to hoping the weather behaves for these two rescheduled shows. 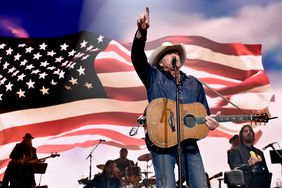