After 10-Year Absence, Hubig’s Pies Are Back In New Orleans

New Orleans just got a whole lot sweeter! After 10 painful, pie-less years, Hubig's Pies are officially back home in the Big Easy.

Hubig’s Pies made their triumphant return with a surprise pop-up outside a Carrollton-area bank Sunday, selling 10,000 of the beloved hand pies in approximately two hours. Photos of people who were lucky enough to get one filled social media yesterday, but that joy was short lived.

The pies were supposed to return to New Orleans’ grocery shelves the following day (Monday), but an issue with the machinery foiled that plan.

Monday morning, Ramsey told NOLA.com the company could be back on track for distribution to stores on Tuesday. He urged patience from those anxious to get their hands on a sorely missed pie. Though availability will be limited to begin, Ramsey said he felt confident that production would ramp up soon.

“I’m more comfortable telling people we’re doing our best and they’ll be at the stores as soon as possible,” he told the outlet. “I’m not going to give a person a reason to not love the pie.”

Before it was shuttered by a fire in 2012, the company’s factory in the Faubourg Marigny district of New Orleans has been churning out perfect little hand pies in flavors like apple, lemon, peach, pineapple, and cherry since the 1930s.

The pies are now priced at $2.49. Ramsey told NOLA.com that reflects the increases that would be gradually accrued over the past 10 years, at 13 cents per year. Hubig's will start by rolling out apple and lemon flavors, followed by peach and pineapple.

Keep an eye out for Hubig’s Pies in New Orleans this week! 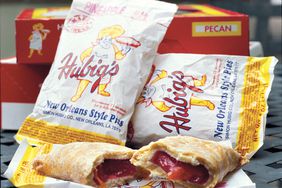 Louisianans Want To Bring Back Hubig's Fried Pies After 2012 Fire