Cookbooks and recipes make it sound like roasting a Thanksgiving turkey is a fairly simple process. But if you’ve ever manned a Thanksgiving hotline, like my sister did for many years when she was the talent for Martha Stewart’s Sirius XM Morning Drive show, then you might get an inkling that a lot of home cooks are somewhat mystified by the process.

Some have never handled whole birds before. Others don’t realize that most Thanksgiving turkeys come frozen and take days to thaw.

In fact, from thawing to stuffing to storing it afterwards, turkey can make your family and friends, as well as yourself, ill if you aren't careful. Here’s some advice on how to avoid getting sick while making and eating your Thanksgiving meal—and the leftovers, too, of course.

When you buy whole birds, unless you’re ordering them from a specialty butcher or a farm, you’re most likely getting them frozen. You can’t cook a frozen bird unless you want a half-burned, half-raw mess of Salmonella. So you need to thaw it completely.

Jacqueline Kleis, executive chef at Wild Fork—a market that specializes in flash-frozen proteins and other foods—says that the best way to do this is by keeping it in the original packaging and placing it on a tray or in a container. This way, you don’t contaminate any surfaces. Then, place it in the lowest part of the refrigerator where it’s 40°F or below.

For small birds, you’ll need at least 24 to 48 hours, and for larger birds, starting at 16 pounds, you’ll need 72 hours. Cook within three days of thawing.

So if you’ve got a 24-pound bird for a big family get-together, you better put that baby in the fridge over the weekend before Thanksgiving. If you forget, accept that you might have a little delay, because “partially thawed poultry could grow potentially harmful bacteria,” Kleis says. Ditto if you thaw it at room temperature or on the counter.

The safety issues don’t end once the turkey is safely thawed in the refrigerator. You now run the risk of cross-contaminating other foods and surfaces when preparing the bird.

"You want to take certain precautions when handling any raw poultry because of the risk from food-borne pathogens. The good news is that by adhering to some basic food safety guidelines, the risk of contamination goes way down," says Alex Harrell, executive chef of Virgin Hotels New Orleans. "First of all, always follow proper hand-washing and sanitizing procedures for any surfaces that have touched raw meats."

Also, wash your sink, utensils, and all surfaces where the turkey touches before and after you work with it. In addition, use non-porous cutting boards so that they don’t absorb any raw juices.

All other food items or dishes you’re making should be put away at this point so they don’t get splattered with turkey juices. The only exceptions: marinades, spices, and stuffing. But there are guidelines for those, too.

For marinades or brines, make sure to throw them away after they’ve served their purpose. Don’t reuse them to baste or to brine other meats. They’re filled with bacteria from the raw poultry.

If you’ve created a rub, make sure to wipe down spice jars afterward with soapy water. Also don’t save any leftover rub.

For stuffing, the USDA recommends not to cook it inside the turkey. That’s because it creeps into crevices and gets packed into pockets. Deep inside, it may not reach the required 165°F that is necessary to kill off bacteria.

“In a baking dish is the easiest way to make sure it is thoroughly cooked,” the Cleveland Clinic advises. You can always add gravy afterward to moisten it and impart extra flavor.

However, if you really want that savory baked-in-a-turkey stuffing, you can have it. Just make sure to pack it loosely and check the stuffing temperature as well as the turkey temperature to make sure it’s safe to eat.

And of course, before stuffing or roasting the bird, look for the giblets and remove them. They’re usually tucked in the tail pocket or the neck cavity.

Generally, you roast a bird by its weight: 13 to 15 minutes per pound. However, it might cook more or less quickly depending on your method, whether or not it’s stuffed, how many times you open the oven for basting—which lets out the heat—and your oven’s particular quirks. Of course, advances and options like convection and rotisserie also change this equation.

Rather than depending on time alone, always use a thermometer to check the internal temperature of the turkey, which should be a minimum of 165°F.

Many cooks prefer to judge it by eye, following the rule of pricking the skin to see if juices run clear. That’s a good guideline, but it doesn’t necessarily mean that the whole bird is cooked throughout. Instead, you should insert a meat thermometer inside the deepest part of the thigh or drumstick.

After the internal temperature is at least 165°F, remove it from the oven, and let it rest for 20 minutes for juices to settle before carving.

Let’s be honest: Most of us have a habit of leaving a turkey and sides around for hours after stuffing ourselves at the table. But that’s not the optimal way to avoid illness.

After two hours, leftover turkey should be refrigerated and cooled down to 70°F. Within four hours, it should be 40°F. “Discard if this rule is not followed to avoid potentially hazardous illness,” Kleis says.

That may not sound ideal when you’re too full to move, but it sure does sound reasonable if you want to enjoy your leftovers safely the next day. 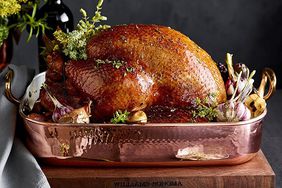 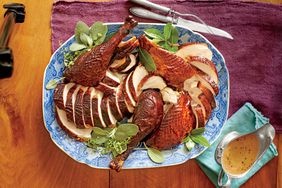 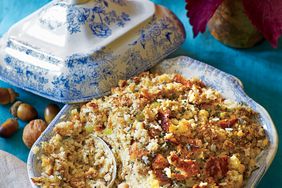 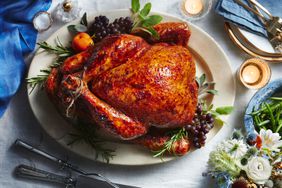 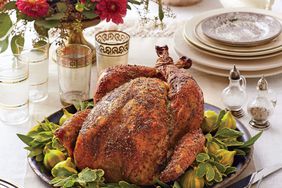 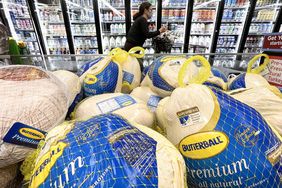 When To Buy Your Thanksgiving Turkey 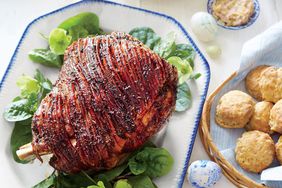