Why Every Home Needs a Tech-Free Space

Quincy Bulin is a writer focused on lifestyle, among other topics. A naturally curious person, she enjoys teaching as much as learning.

Highlights * 10+ years in the fashion and lifestyle space * Provides content strategy and copywriting to brands across industries * Has also contributed to Better Homes & Gardens, Reader's Digest, and more

After spending the past two years on family FaceTimes, Zoom School, and Teams meetings, we're all due for some good old-fashioned quality time. Sometimes this isn't even about time with others—it can also be about time with ourselves, the places we love, or the activities that bring us joy. "We all crave time to unplug, slow down, relax, and enjoy the beauty that surrounds us," says Lauren Wodicka of LBW Studio in Leesburg, Virginia. As Suzanne Duin of Maison Maison Design in Houston, Texas says, "It helps settle the soul for the next day." While many refer to this as designing a tech-free space, Leigh Spicher, National Director of Design Studios for Ashton Woods in Atlanta, Georgia calls it "designing for the moments that matter most." Get the lowdown on exactly how to create a tech-free space and why you need one, plus some swoon-worthy interiors inspo.

"I often find myself drawn to my living room because it's quiet and full of my favorite things," shares Wodicka. "A television in this space would throw the room off kilter and ultimately ruin the peaceful feeling it currently exudes." Spicher agrees, finding tech can become a source of overstimulation. "You can't connect with others in a meaningful, authentic way if you are maxed out, stressed, and filled up with anxiety," she explains.

For some, a tech-free space doesn't mean being without any tech, but rather setting limits on its use. "My client wanted an all-purpose sunroom where the family could gather for game night or a mom's wine evening, and they had difficulty deciding whether or not to include a television," Jenn Cameron of Jenn Cameron Interiors in Baltimore, Maryland says. "Ultimately they decided to add a Frame TV, which would be used strictly for special occasions such as a big football game or New Year's Eve." The family stuck to their rule and the sunroom quickly became the family's favorite place to relax.

Sometimes you have the best intentions to snuggle up with a good book or do some journaling, but then your phone lights up or you remember there's a new Netflix show so you just… don't. If you're in a room sans tech, there's nothing to keep you away from these things. "Beyond living rooms, I have several clients who refuse to add a television to their primary bedrooms and am impressed by that conscious decision," shares Wodicka. To her, this is even more important in children's bedrooms. "At night and whenever possible, I prefer children's rooms to be tech-free to allow them to rest, read, or think creatively; without the distraction of a device." 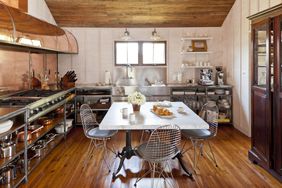 4 Rules for Mixing Metals in Any Space 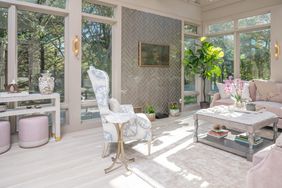 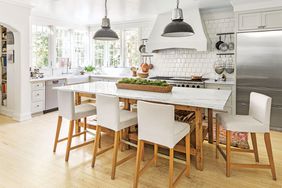