There's something magical about beautiful light," says architect Madison Spencer, who fell for the luminous lure of this Virginia foothills property. Call it a job hazard. A Charlottesville-based specialist in classical architecture, Spencer had been working on an assemblage of buildings on his client's 18th-century horse farm in Keswick, which included this nonhistorical, nondescript 1990s spec house. "It was a fun rescue, a wreck with zero character that we gutted and gave lots of personality," says Spencer, who collaborated with London-based designer Serena Williams-Ellis on the project, which was envisioned as a guesthouse for the larger farmhouse estate. But, he says, "I loved it so much that I moved in."

In addition to the way the golden afternoon light douses the countryside, Spencer appreciates the simplicity of the barely 2,000-square-foot cottage, renovated on a budget. "People can tell when a home really exhibits a sense of personal character," says Spencer, who layers family memorabilia with consignment store and antique finds. "The goal was creating a place where foxhunt guests could shed their boots, throw Barbour jackets on a peg, light a fire, and fix a drink." To maximize natural light and views, they removed some interior walls and doors, pulled drywall off the ceiling to expose beams, and replaced deteriorated windows with two-over-two panes "more in keeping with an old farmhouse," he adds. Remilled oak boards from about 6 miles worth of paddock fencing got repurposed for the walls and kitchen cabinets. Salvaging this old wood demonstrates that "doing things less expensively doesn't necessarily mean doing them cheaply," Spencer says. "The trick is to deal with what you have, set a stage for yourself, and then get the party started." 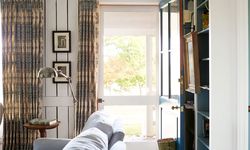 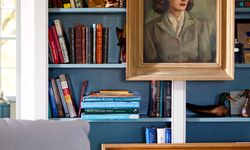 As both the entry and lounge space, the living room had to give a warm, welcoming first impression. Here, Spencer clad walls in white-painted salvaged wood and outfitted the built-in bookshelves with antique and heirloom finds, including a portrait of his mother. 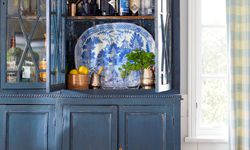 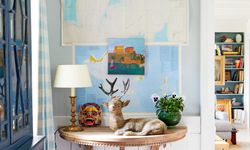 Bartending with a Twist

An antique china cabinet Williams-Ellis found in London displays Spencer's vermouth-bottle collection, along with a full drinks setup. "A bar behind glass becomes all sparkle and fun," he says. French cafe chairs are a light touch, while curtains with a faded gingham pattern bring it all right back to its farmhouse roots.

Kitchen cabinets, custom-made from a stockpile of salvaged fence boards, underscore the cottage's sense of place. Spencer added detail with hardware bought from Whitechapel. The delft tile on the backsplash contrasts with countertops made of honed Virginia soapstone. "It's soft but indestructible, and I love its veining," Spencer says. 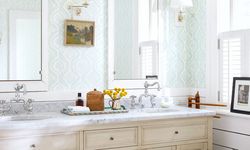 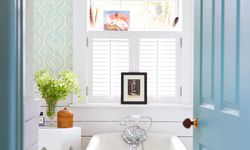 In the main bath, a vanity from Restoration Hardware is topped with mirrors framed in remilled salvaged fence boards, while Spencer chose a Peggy Angus damask wallpaper. "It's an old-school pattern that adds depth but isn't so in your face. It's like looking at clouds," he says.

To compensate for low ceilings (under 8 feet) throughout the cottage, Spencer painted the oak floors white. "It reflects the light and makes things feel more spacious. A dark floor can be like a black hole," he says. Antique coats of arms from European municipalities add color and old-world interest over the bed, while woodcuts of University of Virginia buildings surround a sketch above the dresser. "I love layering pieces of history and family lore that define a life," Spencer says.

Antiques on a Budget

Spencer got this vintage scroll-top desk for $200.

Extending the backsplash to the ceiling gave this space a fresh look.

All in the Trim

In the office, the blue wainscot tones down the bold vintage wallpaper (Tally-ho by Sanderson).

A thumbtacked sketch and framed art give the display a collected feel.

A chaise covered in red buffalo check provides a bold pop of color to the main bedroom. 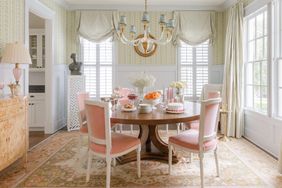