Blake Miller
Blake Miller has written about home design for the last 20 years. She is based in Charlotte, North Carolina.
Southern Living's editorial guidelines
Trending Videos

It was the sound of gravel on tires that sold Meredith Beregovski. As a child, the designer grew up going to her uncle's home on the Chesapeake Bay. "It was an older home with a gravel drive," she says. "I have the fondest memories of that time in my life." So when she pulled up to the circa-1978 A-frame on Lake Norman, North Carolina, and heard the crunching of stone beneath the car, there was an instant tug at her heart. The home itself, though, was a bit of an eyesore. "There aren't a lot of A-frames on the lake, but I just knew that the home could create the feeling I had growing up going to my uncle's home on the bay," she says. Beregovski took the dark and dated house down to its studs and transformed the three-bedroom lakefront cottage into a relaxing retreat with natural-light-filled, open spaces chock-full of the designer's favorite things. Here's a peek at how the designer modernized her lakefront cottage into a relaxing retreat.

The original galley-style kitchen lacked any natural light. During the renovation, Beregovski added skylights to the vaulted ceiling, which instantly brightened the room. In lieu of a traditional all-white kitchen, she opted for a touch of color by using Farrow & Ball 'Studio Green' on the custom cabinetry by Built Wright Woodworks to complement the handmade terracotta tile backsplash, marble counter, and ILVE range. The brass hardware sourced from Bird Hardware adds warmth to the space.

Beregovski used the arched glass front cabinet from her previous home as inspiration for the kitchen's design. The piece was built into the custom cabinetry, which features a soft lavender hue that complements the nearby Farrow & Ball 'Studio Green' on the island. A pair of sconces flank the cabinet, while a vintage rug provides a pop of color to the otherwise neutral room.

Size Up Your Needs

Beregovski reworked the layout of the main floor and created a dining room in lieu of the existing living room. "I knew we needed a casual dining space and the existing house didn't have one," she says. "My son and I spend a lot of time here doing homework, playing games, eating together." The hand beaded chandelier by Palecek has moved with Beregovski to three different homes. "I just love it so much," she says of the dramatic piece. The rug and chairs are vintage.

Lean Into the Mix

The living room's design was inspired by the Stark rug, which Beregovski fell in love with years earlier. "It's a more traditional pattern for somewhat of a transitional space but I loved it anyway," she says. "I wanted that space to feel very welcoming, very bright, really interesting." The addition of the live edge driftwood and limestone coffee table from B.D. Jeffries, artwork from Slate Interiors, and vintage stools in a Cole & Son fabric modernize the otherwise traditional space.

Because the guest bathroom doubles as her son's, Beregovski aimed for it "to have a sophisticated feel that could grow with him over the years, but I also wanted it to be interesting and somewhat playful." She opted for a Cole & Son fish pattern wallpaper coupled with a hunter green subway tile in the shower. The custom vanity by Built Wright Woodworks features handmade fixtures from Morocco.

The spiral staircase was existing, but Beregovski updated it by covering the treads in sisal by Stark and repainting the railing black. To bring interest to the all-white downstairs living area, she added shiplap to the walls and ceilings.

"I wanted that room to feel like it was giving you a hug when you walked in," says Beregovski of the green grasscloth by Thibaut that she chose for the guest room. "I didn't want it to feel too feminine or too masculine so that anyone staying there felt comfortable." The stools are swathed in a Lulie Wallace fabric, and she opted for a vintage bed from Chairish with Amanda Lindroth bedding.

In lieu of the typical shiplap or traditional molding in the master bedroom, Beregovski designed ceiling and wall details and had her carpenter execute her vision. "It's not overwhelming because of the way it's painted all white, but it adds such definition to the room," she says. She wanted the space to feel like a sanctuary, so she kept everything neutral with a vintage bed outfitted with Matouk bedding, Fibreworks rug, and a daybed in a neutral Schumacher fabric.

"I wanted Creighton's room to be a place where he can have a lot of friends come to the lake and stay overnight, so bunks were the best option," says Beregovski. To maximize space and add much-needed storage, she designed each bunk with bookcases and ledges, as well as drawer storage on the bottom to store toys and games. The all-American aesthetic came together with the Schumacher wallpaper, Matouk bedding, and flannel throws. The reclaimed beam she found in South Carolina further enhances the vibe.

Beregovski replaced the existing wrought iron railings with a Scandinavian-inspired design she'd seen in a magazine. "I always say I want there to be a place for your eye to land when you walk into a space," she says. "You could visit this house 12 to 15 times and always pick up a new detail you hadn't noticed before, which is kind of fun." 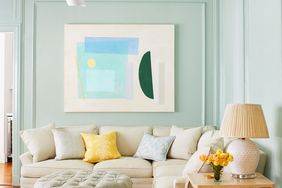 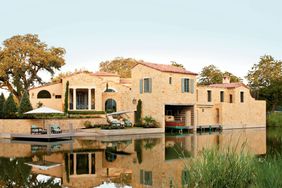