Prepare To Fall In Love With This 1930s Colonial Home Remodel

For more than a decade, Miranda Agee was an interior design and architecture editor in New York City covering some of the world's most prolific luxury homes and brands. In early 2021, Miranda founded The Allis Group - a boutique public relations and brand development firm servicing the design, art, and architecture world that focuses on creating highly-visible opportunities for the industry's most notable creative talents.

"It was an absolute mess, but that's exactly what made the house unique," recalls Martha Jordan* about the first time she and her husband saw the home they bought in Chapel Hill's historic Gimghoul neighborhood. "The overgrown, unkempt garden gave it a certain mystique," she says. This initial visit would have put off most buyers, but the Jordans were totally sold on the idea of turning this 1930s Colonial Revival into a permanent home for themselves (both Durham, North Carolina, natives) and their three children. It would take work—nearly two years—but there was a spirit in this worn-out house that just felt right to them. To amp up the home's 2018 functionality, they turned to architect Rodney Ward, who created a well-disguised 700-square-foot addition and tweaked the layout to make it feel more expansive.

*The names of the homeowners have been changed to respect their desire for anonymity.

When it came to the interior, the Jordans called upon an old friend, Jessica Stambaugh, who had just started a Brooklyn-based design firm with Danielle Walish. "We allowed the family's personality to drive the overall decoration of the house, but we came up with subtle ways to bring in the home's original 1930s character," says Stambaugh. As the collaboration between the designers and the couple continued over daily FaceTime calls and back-and-forth visits, the older house took on a fresh and comfortably modern look. "If you can't find me, I'm likely sitting in the living room reading a magazine, writing out bills, or hiding from the children when they come down the stairs," says Jordan. All of those site visits to Chapel Hill also convinced Stambaugh to uproot and move to Nashville. "This project was my introduction to the South. The pace of everyday life and sense of hospitality really appealed to me," she says.( Sherwin-Williams Creamy (SW 7012) and Farrow & Ball Off-Black (57))

Because the living room is right off the foyer, it must be a showstopper. But therein lies the challenge: "It's hard to call this the formal living room because it's really the only living space in the house," says designer Danielle Walish. "We needed it to be pretty and to wear well over time." Fabrics that hold up to kids and spills, such as the blue linen on the comfy sofa (Short Scroll Arm Signature Sofa; georgesmith.com) and the plush mohair on the antique chairs, create a sit-anywhere atmosphere in an otherwise dressy room.

Carve Out Space For Crowds

Comfortable and kid-friendly are two optimal attributes in kitchen dining areas. Tucked into a bay window, this might be the busiest spot in the whole house. "We eat here, play games here, and just hang out here," says Jordan. "I wanted it to be really cozy so anyone could sit and stay awhile." Durability was also very important for this area, so the designers used an easy-to-clean Nanotex-coated fabric to cover the banquette (Piet Performance Linen in Linen; fschumacher.com), and they custom designed a simple square table for the space.

A small drawer is cleverly hidden in the banquette to hold anything from toys to paper and crayons for kids.

This comfy settee and ottoman are set into a bay window, forming another seating area without interrupting the traffic flow of
the kitchen.

Ward and the designers worked to make the renovated kitchen match the spirit of the older home. Hand-hewed carpentry touches like the wood floors, detailed cabinetry moldings, a paneled vent hood, and the built-in sideboard help the room feel rooted in the past. Vintage pendant lights sourced from Olde Good Things and a gray paint color for the island (Farrow & Ball's Blue Gray, 91) add a sense of depth to the traditional, almost all-white kitchen.

"Balancing dramatic moments is something we always aim to do," says Walish. Case in point: The cascading floral wallpaper (Pierre Frey's Beauregard in Jute) hits a whimsical note in contrast to the stately Maryland-made Iatesta Studio X-base dining table (davidiatesta.com) and the ornate crystal chandelier (a holdover from the Jordans' previous home). "We like to use Round tables to loosen up traditional dining rooms," says Stambaugh. Vintage wood chairs painted in a pale green (Farrow & Ball's Breakfast Room Green, 81) contribute a cozy, country feeling and rest right on top of the wood floors, which the designers decided to leave bare for an effortless effect. Altogether, the space exudes accessible elegance.

Neutral primary bedrooms are commonplace, but Walish and Stambaugh kept the space from veering into boring territory by using pieces of furniture with strong lines. The black iron canopy bed adds definition without detracting from the room's airy nature, while an open-shelf table manages to turn the typical bedside standby into a storage-friendly work of art. "It's one of my favorite pieces in the house, and it also holds so much," says Jordan. The homeowner, who's a talented amateur artist, created this standout painting over the bed.

The fresh, feminine print (Hermine; toilesdetours.lemanach.fr) covering the chair helps this desk double as a vanity.

Traditional and fun, the young son's room echoes the rest of the home's classic vibe. "It all started with the antique brass bed, and then everything else came together," says Stambaugh, who notes that the wall color (Benjamin Moore's Marlboro Blue, HC-153) was the next choice. To top it off, the designers chose a modern lantern-style light (remains.com) to infuse the space with a youthful spirit.

"This space brings out my own inner girly girl," says Jordan. "We went wild with so many different patterns and colors, but it's incredibly serene too." Stambaugh and Walish limited themselves to a strict pastel pink-and-blue palette, which they matched with lots of white to prevent any one element from overwhelming the entire area. The designers also focused on creating a collected feel in the room by pulling in a painted vintage dresser, a gilded bench, and decidedly grown-up art

Because this bath is located in the basement, the designers lightened it up as much as they could. They painted the floor a stark white. "It can be scary to paint the floor, but it instantly opens the space," says Walish. To keep it from feeling too bare and subdued, the designers included a little Southern charm. "Peter Fasano's Coop wallpaper, which is modeled after chicken wire, adds a hint of the rural South and a playful nod to the North Carolina location," says Walish. The old-timey washstand matches the charm of the retro-printed wallpaper. 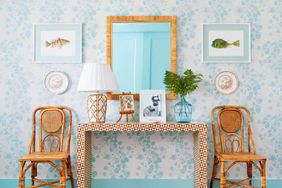 A 1970s Florida Ranch Gets A Bright And Cheery Transformation 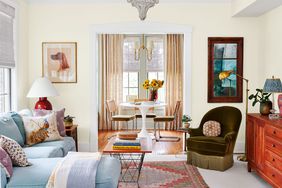