Decorator Fran Keenan fills a new build in Homewood, Alabama, with touches she has borrowed from the past.

"My vision wasn't complicated. I wanted mid-century inspired, eclectic interiors with a place by the fire for everyone—a look that wasn't cold, stuffy, or uninviting," says homeowner Fran Chaiprakob. Choosing the location for her family's new build was easy: a lot down the street from their old house in a tight-knit Homewood neighborhood. Selecting the team was even simpler. "Twin Construction is a longtime local establishment, and they work to keep the charm of our community intact," says Chaiprakob. "Fran Keenan was the only designer I considered. She is a friend who knows my aesthetic and is also the person who will push me to something even more beautiful and exciting."

With a dream team intact, Chaiprakob and her husband, Jeff, turned to the pros to bring their vision to life. "We wanted warm colors that would invite someone to settle in and tell their story," says Chaiprakob. Keenan called on her favorite historic-house precedents (think antiques, vintage rugs, and window seats) to infuse this brand-new home with age-old appeal.

During construction, Chaiprakob added messages of intention on the subfloor and on the studs throughout the home. Under the kitchen table, she wrote, "I want a house with a crowded table," which she borrowed from the lyrics of a song by the country music group The Highwomen. In lieu of an island, Keenan found a 10-foot-long antique farm table for the room's centerpiece. "We were hesitant, but what has resulted is hours of preparing food, drinking wine, and listening to the laughter of dear friends. This is my favorite place in the whole house," says Chaiprakob. Around the perimeter, soapstone counters top white oak cabinets designed with modern slab doors. 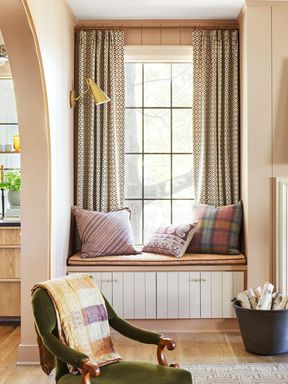 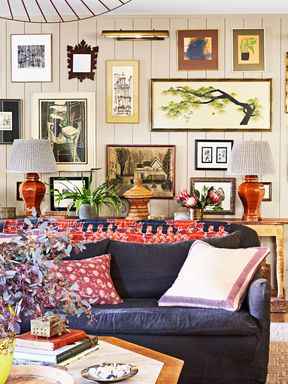 Carve Out a Comfy Perch

In the family room, a window seat makes the most of a small nook. "It's one of those nostalgic moments that feels very historic," Keenan says. She installed V-groove wood paneling to evoke the mood of an old den. "This room feels like it could have been here for a longtime," she says.

Find Beauty in the Mix

Strive for a balance between yin and yang, Keenan advises. Earthy olive (Farrow & Ball's Bancha, No. 298) provides a backdrop for layers of color, pattern, and texture in the sitting room. A refined velvet sofa sits opposite vintage leather chairs. "If a room starts to seem stodgy, a striped rug can make it feel young again," she says.

Allover pattern gives the primary bedroom a jewel box effect. Thibaut's Mitford, used for the wallcovering and draperies, pulls in the palette's warm tertiary tones, like grass green and eggplant. "The black background was dramatic but also comfortable for a bedroom," Keenan says. Vintage milk glass pendants (originally intended for the kitchen)flank the sleek canopy bed. "That's probably one of the details that made me the most nervous, but they're so fun," she says.

"We wanted the two areas of the primary bath to speak to one another but feel separate at times," says Keenan, who hung an elaborate drape between the spaces. "I love bringing fabrics into utilitarian spots." She painted the walls chocolate brown (Farrow & Ball's Salon Drab, No.290), which is woven throughout the house. "Fran is a hairstylist, so the vanity area was important," notes Keenan, who installed a large antique mirror and hung framed ones on top. "It has an old-school vibe."

Don't Shy Away From Color

A citron hue takes center stage in the guest bedroom with a groovy velvet bed from Lulu and Georgia. Flowing curtains in a sweet ditsy floral pattern from Jasper Furniture & Fabrics frame the windows, which got the historic treatment. "The trim is like that used in old houses," notes Keenan of the thoughtful move. "The backband is important on the window casings, and we took that directly from the 1920s."

Have Fun on the Walls

"We needed the sink to be centered and loved the idea of having a backlit mirror there for guests," says Keenan. She paired the vibrant vanity (painted Benjamin Moore's Savannah Green, 2150-30) with a graphic Thibaut wallpaper. "Sometimes when you're working in a new house and just about every wall is painted, a room gets a lot of bang for its buck when you bring in some pattern to mix things up," she says. 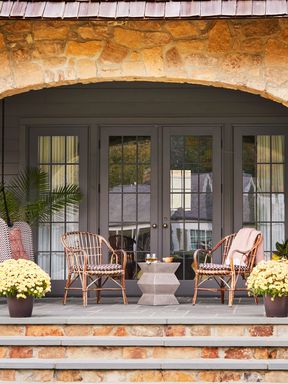 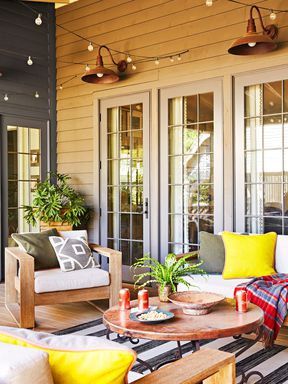 Steal Ideas from Your Neighbors

Keenan and Twin Construction's Crystal Tucker pulled inspiration from the area's older houses to design a late-1920s-style Colonial home with English details. The front porch's elliptical arch is mimicked in the interiors. Using natural materials like stone and cedar-plank siding and a cedar shake roof is also a historical nod. The siding is in Pratt & Lambert's Field Gray, and the shutters are in Sherwin-Williams' Brainstorm Bronze (SW 7033). 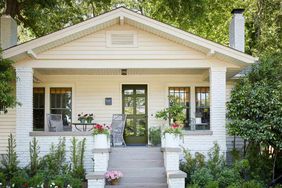