Kelsey Mulvey is a freelance lifestyle journalist with over 10 years of experience in digital media. After covering lifestyle and design content for the Wall Street Journal, Off Duty, and Business Insider, Kelsey went full-time freelance in 2017. Since then, she has contributed to various publications like Architectural Digest, Elle Decor, and Lonny, among others.

When Nina Long and design partner Don Easterling were tasked with sprucing up a primary bathroom in anAtlanta-based home, they were determined to swath the walls in a traditional-yet-fresh repeat. Fortunately, they didn't have to look too far as Schumacher's Hydrangea Drape ticked off all of the boxes.

"We knew it would be bold to do an entire primary bathroom with it, but it was classic enough to last and be interesting without trendy," explains Long, who works at a local firm called Matthews Furniture + Design. "Plus, the subtle gray and white tones played nicely with the bathroom marble and polished nickel fixtures."

Of course, Long and Easterling aren't the only ones to have picked up on this pattern's power: Hydrangea Drape is having a moment. Though Schumacher's well-appointed patterns have been used worldwide since 1889, there's something about this one's lush hydrangea blossoms, ornate border, and large-scale floral stripe that feels quintessentially southern. According to Dana Caponigro, Schumacher's creative director, this "it" repeat is being used exactly how it was intended when it was designed in 1939. She also acknowledges how the pattern pairs well with the Southern aesthetic.

Long agrees, noting that the floral repeat feels distinctly Southern. "Hydrangeas are in landscapes from the coast to the mountains and besides, all southern gardens have hydrangeas," she says.

This repeat is taking the region by storm, but don't write it off as ubiquitous. Available in six colors—ranging from a cheery lilac to a neutral gray—there's ample opportunity to find a shade that best suits your home.

Another perk? Hydrangea Drape works in a myriad of spaces. "It's so usable—not too big and not too small," Caponigro says. "It works in entryways, bedrooms, and powder rooms." North Carolina-based Kristie McGowan even applied it to the ceiling of her entryway and kitchen at home, as shown below.

Designers say the pattern has a lightness that makes it go well with everything. Compatible with stripes, dark wooden furniture, and other florals, there's no stopping this pretty pattern—just make sure that you have plenty of it.

"If possible, do place it in a location where you have a lot of walls exposed, when using it in a room with many windows or cabinets you may not be able to appreciate the beautiful pattern," Long advises.

In fact, the Atlanta-based designer recently applied Schumacher's Hydrangea Drape in another home's hallway. After all, when a repeat is too good, you'll want to use it over and over again. 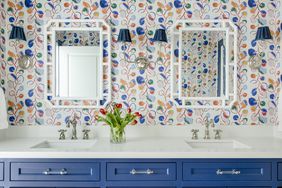 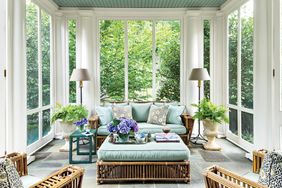