Beyond football and food, the most popular tradition in the South is joining a fraternity or sorority. Below the Mason-Dixon line, Greek life is a prominent part of the collegiate experience on Southern campuses to forge lifelong friendships, engage in positive community-building activities and, obviously, to throw the best parties. Since Southerners live by the motto, "the bigger, the better," we thought we'd give you a peek inside the sorority houses whose exterior and interior adhere to that mantra. From breathtakingly beautiful chandeliers and structural columns to impressive baby grand pianos and eye-catching staircases, prepare to gasp in awe at the most envy-inducing and over-the-top sorority houses in the South that'll make you want to rush ASAP.

Kappa Kappa Gamma at the University of Arkansas

The first impression is what counts the most. Luckily, this beautifully styled Kappa Kappa Gamma house at the University of Arkansas makes a stylish first impression from the entrance. Here, you're greeted by dramatic flower arrangements and a curved staircase with an elegant wrought iron railing.

Phi Mu at The University of Alabama

The ladies of Phi Mu sorority at The University of Alabama are lucky enough to call this brand-new $13 million dollar mansion "home." This grand sorority house features jaw-dropping light fixtures, marble floors, a baby grand piano in the foyer, and skinny columns on the outside.

It's a safe bet studying isn't hard for the young women of Kappa Alpha Theta, especially when surrounded by the pristine beauty of contemporary furnishings and modern accents. Tall, arched windows inject sunshine into this bright and cheery study hall at SMU's campus in Dallas, Texas.

Chi Omega at the University of Missouri

This is more like a sorority castle than a house. Just look at that second story balcony, only fit for princesses!

Alpha Delta Pi at the University of North Texas

One look at the renovated kitchen area in the Alpha Delta Pi sorority house at the University of North Texas, and you can easily see why it's regarded as the "Pi Palace." The center island is complete with a built-in-storage area, which features individual pantry drawers with locks for each resident to keep their personal food items.

Tri Delta at the University of Florida

Florida is home to tons of beautiful sorority houses, but the Tri-Delts at the University of Florida have bragging rights to one of the most beautiful and largest sorority houses. Every two rooms share a common area.

Alpha Gamma Delta at the University of South Carolina

Landscaping can create major curb appeal. Don't believe us? Take a cue from the Alpha Gamma Delta sorority house in South Carolina, and spruce up your outdoor digs with palm trees, a welcoming walk, and a lush, green lawn.

Sigma Kappa at the University of Louisville

An open floor plan puts the sorority's official colors of maroon and lavender on front display of this three-story house. Colorful, textured throw pillows instantly transform each room into an inviting space for meetings, large gatherings, and recruitment.

Southern sororities are an honored tradition for many collegiate women, and their stunning living quarters reflect just how much care goes into their image. Take a look at these professionally decorated Southern sorority houses – with everything from spiral staircases to intricate iron details – for some major home inspiration.

Alphi Phi at the University of Oklahoma

Sleek furnishings, clean lines, and a neutral color make this formal living room at the Alpha Phi sorority house both modern and minimalistic.

Phi Mu at the University of Georgia

Before it was sold to the Phi Mu sorority in 1964, this grandiose home belonged to Thomas Napier Hamilton, who is said to have been Georgia's first millionaire. And, the wealth here is in the details, from the baroque ironwork to the romantic, spiral staircase of this Victorian-style, 17-room house.

Chi Omega at the University of Arkansas

A unique chair is just the thing to elevate an ordinary space, and we love the bright, detailed print on the back of these dining chairs in the Chi Omega sorority house.

Kappa Delta at the University of North Carolina

The country, shabby-chic decor of the Kappa Delta sorority house is giving us all the warm fuzzies.

We can just imagine sunny days spent out in this beautiful courtyard at the Delta Delta Delta sorority house in Louisiana.

Zeta Tau Alpha at the University of Tennessee 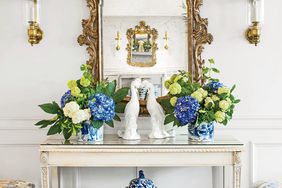 The South's Most Beautiful Sorority Houses