Most of us have spent more time in our homes these past few years than ever before. All of that time has impacted our design choices (we're looking at you, open floor plans) and has left many people dreaming of something new.

"People are appreciating home even more,"says Baltimore-based interior designer Jenn Cameron. "We've spent so much time at home and realized that having a beautiful space really makes a difference."

By nature, trends come and go, but if your home brings you joy despite something that we tote as outdated, then don't let us rain on your parade. "If you love it, then the trend doesn't matter. I often tell that to clients," Cameron says. "There are definitely trends in design, like clothing, but as long as you love it then we can make it work. Anything can be in or out depending on how it's styled."

For those fantasizing about your next update, these are the home design styles that are headed out and those that are coming back in, according to designers.

"Very neutral spaces are definitely going away," says Hope Austin, Atlanta-based interior designer. Like fellow Atlanta-based designer Jared Hughes and Cameron, she's seen a decline in all-white or all-gray spaces that were hot on the charts just a few years ago. Rather, creams, tans, and earth textures are on the rise, Austin reports. "I think that people have been in their house so much over the last couple of years that the houses are much more lived-in than they were before," she says. "People are steering away from all-white, needing more personality and durability." White walls are still clinging onto their prominence, but are taking on different forms. Instead of flat white walls, Austin recommends adding texture by using plaster. Meanwhile, Hughes has seen a shift toward elevated neutrals. "Chocolate brown is making a comeback. It's a nice warmer, neutral version of the grays," he says. "We're also seeing green everywhere."

"We've overdone shiplap, but people still love it," says Cameron in agreement with both Austin and Hughes. "People are coming up with creative ways to use it still, like continuing it up into cathedral ceilings or using a wider plank, because it's such a cool architectural detail." She also notes updates including painting the shiplap, breaking up a shiplap wall by incorporating ledges, or even vertical planks. Instead of revamping the look of shiplap, others are turning away from the feature completely, opting for alternatives including wall moldings.

"I don't like it," Austin says resolutely about accent walls. "If you're going to wallpaper one wall, wallpaper them all. If you're going to paint one wall, paint them all." There are still ways to add pops of interest to a room, though. "If you want to do an accent, I love a wallpaper ceiling, but that feature wall—whether it's paint, wallpaper, or millwork—makes the space feel like it's missing some things elsewhere," she says. "It's unfinished to me."

Once all the rage, open concept floor plans are now falling out of style in favor of traditionally divided rooms. "I do believe that since quarantine happened and so many people were at home for such long periods of time, I'm finding that people want to add doors," says Austin. "They need space to have a home office or just have a minute to themselves." For those who feel the need for this kind of division but have already committed to such an open floor plan, Austin recommends designating spaces to unique needs such as dining and living spaces rather than just one open space. Separating spaces with rugs can be helpful, she says.

"People are getting away from that," Austin says about black hardware and faucets. "Gold is still very much a thing, but the gold is becoming more muted and finishes are more unlacquered—unlike a shiny gold—something that really ages well." The same goes for once-popular black iron and steel windows and doors, she reveals. She's now seeing people who had those installed painting them white. "Brass is really the popular metal as far as kitchen and bath," Hughes relays.

"Any kind of matched furniture sets," Hughes says, are being lost to time. Not only are designers opting for more varied furniture pairings, but Hughes has observed that retailers aren't offering matched sets as an option anymore. "You might have matching bedside tables but you don't have the matching chest or the matching highboy anymore," he shares. "It's something interesting that's going away with the way that big-box retailers are selling furniture."

"The formal dining room is coming back. Everything was just an open, eat-in kitchen and living room style for a while," says Hughes, who has recently seen young clients excited at the prospect of a distinct dining setting. "With those open floor plans, dining rooms have gone away," agrees Austin, "but in the South, people still really like a dining room."

"People are no longer afraid to venture into color," says Hughes, who has observed a resurgence in bright colors and pops of color rather than neutral rooms. Austin agrees, noting that people have been "staring at blank canvases" for so long that she thinks they've been craving pops of color, easily incorporated into details including pillows and decor.

The color possibilities are endless, but like everything else, come in waves of what's popular. "I don't think blue will ever go out of fashion, but we're seeing less blue and white requests," says Hughes. "Everything's going warmer. Yellow is a big color coming back into interiors—and it's not the kind of terrifying 80s butter-mellow yellow. It's rich, saturated yellows." Austin reports that dark walls are skyrocketing into style, especially rich blues and greens, or even blacks. "You're seeing darker color tiles, too," she says. "People might use an emerald green for their backsplash or their shower." Hughes agrees: "I think people are no longer afraid to venture into color." Meanwhile, Cameron makes a case for vibrant pinks as the next it-color.

"Plaid is making a big comeback right now," Cameron has observed, "but there's been kind of a twist on the plaid." Now she's seeing a more modern style begin to pop up that's wider and plays with the scale of the horizontal and vertical lines.

Grandma got something right with this home feature, but the newest version takes a few stylistic liberties. Like the classics, these window treatments cover only half the window—perfect for some privacy without completely blocking out the natural light. "We like to call it 'not your grandma's café windows,'" says Cameron. "The pleat style is updated so it's a more modern pleat. It doesn't have that old farmhouse vibe to it, but a much more contemporary style."

According to Cameron, many homeowners are opting for pendant lights over lamps, especially for bedside lighting. In doing so, they're freeing up space on their nightstand and wall that would otherwise be blocked by the lampshade. "It's creating something interesting on that back wall instead of just the headboard," says Cameron.

"Personally, I don't think wallpaper should have ever fallen out, but it's so popular right now," Cameron reveals. "And it's not just on the walls. It's wallpaper on the ceiling, wallpaper behind bookshelves… The more wallpaper the better." 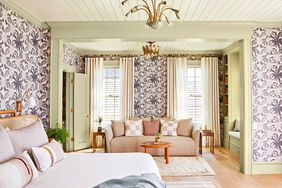 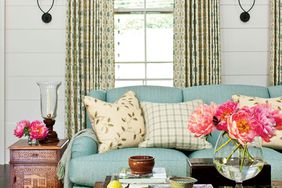 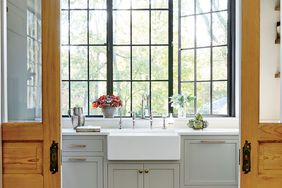