Turn your own home into a seaside retreat no matter your location with tips from these South Carolina homeowners.

Undaunted by the distance from the sea in their marshlands community, Sheila and Dennis Hood established an isle of coastal tranquility through in their Palmetto Bluff, South Carolina home.

In keeping with sturdy and modest structural coastal aesthetics and in response to the local climate, the home features wide roof overhangs, simple details, and comfortable porches to catch refreshing breezes. Tabby, which was used on the home’s exterior, is a mixture of crushed oyster shells that dries like concrete and was often used by early settlers because its ingredients were readily found along the coast.

The Hoods have made their front porch one of the most congenial outdoor spots in Palmetto Bluff because their house doesn’t have a conventional foyer—pairs of French doors open right into the main living room. This in-between space is where they greet guests and neighbors, so it is here that their coastal touches begin.

The Hoods decorated their front porch with lamps that look like sea-weathered wood, sisal rugs, and throw pillows with wavy and coral-like patterns inspired by the Atlantic Ocean just a short drive away.

While not a Southern invention, the natural ventilation of shutters has become an integral part of Deep South design.

If the homeowners need more seclusion or shade on their porches, all they have to do is close a bank of shutters. These handy panels combined with decorative solid walls below and fixed louvered shutters above further transform both ends of the porch into cozy outdoor rooms.

Operable shutters also flank the French doors inside the porch. “I love using shutters with adjustable slats because even when closed, the slats can be positioned to let air circulate,” architect Jim Strickland says. “Plus, being on this porch when it’s raining, with all the shutters pulled shut, is such a treat.”

Inspired by the sea, tortoise shells and conch shells accessorize the living area, while starfish adorn the mantel. Books on South Carolina’s coastal area lie stacked on the coffee table and topped with shells. Vases of palm fronds simply picked up from outside complete the tropical ambience.

A Touch of Blue

Although a gray-blue palette that reflects various shades of water and sky is dominant on the porches, Sheila didn’t want to overplay the blue tones inside the house. The slate surround of the fireplace, cream-colored sofa, and light blue runner on the table reinforce a neutral color scheme with sparing use of blues.

Structurally, the table behind the sofa helps divide the room.

The kitchen also creates an interplay of neutral and blue tones. The cabinetry, marble countertops, and backsplash create an off-white backdrop for bowls, trays, and dishware. “Again, we didn’t want our use of blue to be too heavy-handed or expected,” says Sheila.

Nautical-style lighting above the island helps carry the coastal look into this space.

An Extension of the Interior

French doors open directly from the kitchen to a front porch dining area that acts as an extension of the interior. Sheila, Dennis, and dog Annie spend much time enjoying the porch’s sheltered spaces.

The back porch is outfitted with coral-patterned pillows and a swinging daybed to make a comfy retreat. Instead of shutters, the couple relies on durable draperies made from waterproof sailcloth for shade and privacy. Potted ferns add the lushness of nearby marshlands. 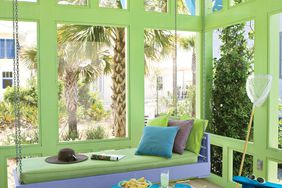 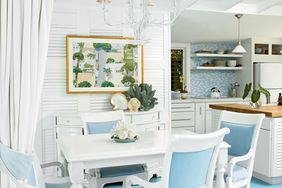