"The house is a container for memories, for things that make us happy," says John Hackenberg. He's talking about the home he and his wife, Joan, built in Mount Pleasant, South Carolina, where they moved from Charlotte to be near their only child, Jenny Keenan. For the Hackenbergs, it was just a matter of figuring out which memories made the cut. The couple's Charlotte home, a rambling farmhouse, was filled with art and furniture they had hunted down together. ("My dad was always the type crawling around on the floor looking at how pieces dovetailed," says Jenny.) But would the furnishings they loved from their old life feel at home in the Lowcountry?

Obviously, no one was better suited to help situate Joan and John—and their things—than their daughter, who'd spent her childhood tagging along on antiquing trips. Jenny offered them her expertise on one condition: that they partner with architect Beau Clowney, who had helped design her own home. "At first, I thought they were crazy to build a house in their seventies, but with Beau on board, it was smooth. He still comes by and fixes things for them," says Jenny.

More Than Meets The Eye

Joan and John Hackenberg's lot, just down the street from daughter Jenny's home, was the perfect location but a tricky shape—long and narrow. "We designed the house to feel old from the front, very symmetrical, like a historic raised cottage," says architect Beau Clowney. "But the deeper it goes back, the bigger it gets, so you end up with a nice-size home that doesn't overwhelm."

There are bleached walnut floors and tons of light, features the Hackenbergs' Charlotte house lacked, but also some creature comforts. The primary suite is almost a carbon copy of their previous one. Jenny drove to Charlotte to measure certain pieces—the new butler's pantry was designed around a nonnegotiable pie safe—but also stocked up on big modern paintings and a colorful wallpaper (with peacocks!) for the new dining room.

"Everything in this house is brighter and happier, which is what they need. They're young at heart," Jenny says. Of course, having grandchildren running around helps too. "Jenny's kids are here all the time, which is why it's so important to us that the house is comfortable. It's not a museum," says Joan, who, after years of living in a forested area, now loves waving from her office window to neighbors walking by. It's proof that, even in a container maxed out with memories, there's still room for new ones.

The screened porch begins directly off the foyer, ends in the kitchen, opens to the living room, and overlooks the whole backyard. "The views to the porch and all the doors and windows give the house a very relaxed, Southern feel," says Jenny.

"This is the most arches I've ever done in one house," says Jenny. "My mom loves them." Some of the best are in the foyer, where Jenny had Beau design sliding arched doors leading to her mother's office and the library on either side. They serve as conversation pieces when closed and clean cased openings when pushed in. On the walls, she had a carpenter re-create millwork she had seen and loved in old European houses. It's shiplap surrounded by raised panels, which grandly frame out the gold mirror.

"This is probably their favorite spot," Jenny says of the sunroom. That wasn't accidental. She researched patterns and colors with her parents to devise the large, geometric floor design (painted by Suzanne Allen) and chose chairs instead of couches. "They create a good conversation area, and my parents prefer to read in chairs." This room is always where you'll find Joan chatting with friends, often with the doors to both the screened porch and back porch flung open.

The Hackenbergs' main must-have in the kitchen was a large island where grandkids could gather. Jenny kept the design streamlined with Globus pendants by The Urban Electric Co. and a punchy painting by Catherine Booker Jones.

To keep things interesting, Jenny skipped barstools in favor of a bench to limit leggy furniture, as that piece backs up to the breakfast table and chairs. John was initially dubious. "He thought it would be hard to get in and out," says Joan. But she says every visitor comments on the cool feature and even the skeptic takes a seat now and then. Jenny added a stripe of Zak+Fox's Byzantine to the bench for a bit of pattern that wasn't overwhelming with the other elements in the room, namely a wall of Clé tile in the Cigar Shop pattern.

The design of the butler's pantry revolved around the pie safe, a 19th-century walnut piece that John and Joan found in southwest Virginia and John wouldn't part with. "The guy we bought it from found it in a chicken coop, painted white, with roosters scratching on the top," says John. He loved the details—a curved skirt, intricately pierced tin "so that air could get through but flies couldn't"—and laboriously restored it.

Learn To Lighten Up A Little

The O'Lampia Studio chandelier over the breakfast table (another item John was wary of but now admits to loving) serves as a counterpoint to two more traditional pieces the couple wanted: a table that seats up to eight, made by Mike McSwain (a furniture builder in Charlotte who has collaborated with the Hackenbergs on several pieces), and a dark cupboard, which John had limewashed to lighten it up. The floors throughout are bleached walnut, and most of the interior rooms are painted Farrow & Ball's Wevet (No. 273) to provide a warm but airy backdrop to all the antiques.

Throw In A Curveball

The mantel is one of two that the Hackenbergs relocated from Charlotte. This one, which has intricate carving from the early 19th century, was a 25th wedding gift to John from Joan. "They love collecting these pieces, and everything has a story," says Jenny. She balanced those darker antique keepsakes with lighter, more contemporary furnishings to give the house an uplifting personality. Enter the new, softly curved couches and a slick mirrored coffee table. "The mantel is very traditional, so we needed those clean lines," says Jenny.

The toughest conversations came from swapping out some of the classic landscapes and portraits for modern art. Joan was a fan, but John says he had to warm up to the idea.

Go With Your (Daughter's) Intuition

"Jenny called me from New York City before Beau even started the plans for the house and said, "Mom, I found the wallpaper for the dining room,"" says Joan. "She knew what she was doing." The lush and pricey Zuber print (Le Brésil) set the color palette for the entire home. Jenny points out that the large doorways and a wainscot covering half the walls moderated the expense. It's a pretty contrast to the heavier pieces in the room, like the rectangular dining table and the 1840s walnut sideboard made in Wake County, North Carolina. Joan originally wanted a round dining table, which didn't work with the scale of the room, so Jenny gave the existing one a fresh look with new upholstered chairs.

Give Mom Space To Make Waves

Because Joan's office is directly off the foyer, it couldn't be all open file cabinets and computer cords. She brought several things from Charlotte—a small painting, the rug, and personal tchotchkes (a collection of decorative elephants that she says bring good luck)—but Jenny upgraded her office chair with a new print and found a pale green campaign-style desk from Hickory Chair. A Sally King Benedict painting adds a friendly vibe, something Joan definitely feels when she's in the space. "I never get bored. There's always someone walking by outside, waving," she says.

Get To The Point

Beau's signature is a triangular bay window he calls "the beak," a feature he saw in a beach house 30 years ago and uses often. The Hackenbergs' beak is in Joan's office overlooking the pool.

John has an extensive collection of black and white art, a mix of lithographs and etchings, that he installed to make his own gallery wall in a stairway. "It's his project, and now if he's out and about, he can add to it, instead of buying furniture. They don't have any more room!" says Jenny.

Stick With What Works

The couple loved the layout of their primary bedroom and bathroom in Charlotte so much, they had Beau recreate it in this house. And other than a few minor changes—the vintage Italian lamps were in a smaller vacation home the Hackenbergs previously owned in Mount Pleasant—Jenny didn't alter the decor. "The drapery and paint color are lighter, but the Bennison fabric on the chairs is something we never got tired of. It looks worn in and soft," says Jenny. The mantle, whic is from Mecklenberg County, North Carolina, was restored to its original black finish by John.

Jenny found one more place for Beau to add an arch. This one in the primary bedroom turns the freestanding tub into the ultimate relaxing retreat.

The guest room didn't need much more than the grand canopy bed to make a statement, but Jenny finished off the room with a quirky chandelier from Wilmington, North Carolina, artist Louise Gaskill, who repurposes old glass and metals. "We wanted a house where all of our friends could visit and be comfortable," says Joan.

Joan and John went from a wooded lot in Charlotte to a pool and palm trees in Mount Pleasant. Landscape designer Sheila Wertimer created a checkerboard with pavers and grass around the pool and trained greenery up the courtyard walls.

Beau took advantage of the space beneath the raised exterior to fit in this outdoor dining area. This space is perfect for enjoying those warmer days. 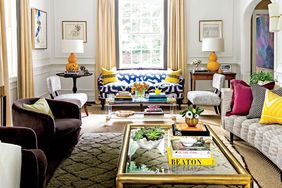