Wait until you see the photos of this renovated home from the latest episode of HGTV's Home Town.

Who's been loving this season of Home Town? We can't get enough of the fifth season to raise our spirits amid the coronavirus pandemic and the most recent episode, "Clean Lines, Open Spaces," was no exception. In fact, it gave us such design inspiration for revamping a small kitchen, that we're practically ready to start "demo day" in our own cooking space.

The secret to boosting the look of a small kitchen may very well be in the backsplash, as Erin Napier revealed to us in the midst of revamping the new home for Laurel resident Jeff, a nurse practitioner who lost his home during a local tornado last year.

Though Jeff wanted his kitchen to be light in its color palette, the Napiers decided to go for a navy blue backsplash tile to add a bit of intrigue to his relatively small kitchen space. "[The backsplash tile] is super cool, it's a little different, huh?" Erin says to her husband Ben on the show of the navy blue design. Marveling at the sample, Ben oohs and ahhs saying, "it's textured!" before Erin adds that it somewhat reminds her of a "men's necktie."

"We wanted to keep the kitchen bright with the countertops and everything else, but there's not a ton of tile going in on the backsplash, so I think we can afford for it to be dark," Erin adds. As you can see from the kitchen photo Erin posted from the home's transformation (it's the second photo below), the beautiful tile gives the cozy space a sense of depth and an added element of visual appeal.

What do you think of Jeff's mid-century modern home? We're ready to plop down on the couch in that sun-filled living room for the day. 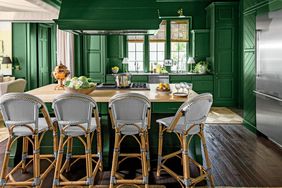 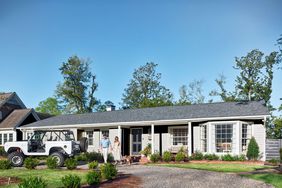