Through daring moves that bank on contrast and color, designer and artist Alaina Ralph transformed an empty ranch into a comfortable and creative work of art.

Blank canvases don't scare Alaina Ralph—not even a 4,200-square-foot one handed to her by a young and quickly growing family in need of a house to call home. Such was the case when she agreed to decorate this rambling 1954 ranch in James Island, South Carolina. The house was in healthy shape, but it was lacking any sense of personality. Its new inhabitants wanted it to be "playful, comfortable, and (above all) livable," Ralph says. "The home needed to hold up not only to muddy paws but also to children with markers in hand."

Luckily, the interior designer is also handy with a paint palette, thanks to her background as an artist. (She studied painting during her undergraduate years and is now sought after for her whimsical oil portraits of people and pets.) So she took a cue from her artistic training and set out to infuse the sprawling property with character and thoughtful personal touches. Read on for Ralph's brilliant and bold decorating moves—from her graphic pattern choices to her dramatic color palette.

"While this room is not functionally the heart of the house, it is literally the heart because you have to walk through it to get anywhere, so I wanted it to be dramatic," Ralph says. She thought that bright white paired with any deep, dark color would fill the bill. That's when she found the Cowtan & Tout Malachite velvet fabric in Emerald for the curtains. Once she decided on that, everything else in the room fell into place—including the bold wallpaper (Eden; weitznerlimited.com). The white part is the lacelike paper, and the wall behind it is painted in Benjamin Moore's Erin Green (608). Ralph went one shade darker for painting the trim, using Benjamin Moore's Garden Cucumber (644).

What is now the family room was once a porch. From the windows to the couches, Ralph embraced the space's connection to the outdoors. She emphasized three walls of tall windows (a rare feature for low-slung ranch houses) by dressing them in unlined, sheer curtains to capitalize on the light pouring through. She had the sofas built extra deep to maximize comfort and outfitted them in indoor/outdoor fabric (Tisket Tasket in Sea Salt; perennialsfabrics.com). "If we were going to be daring enough to go with a cream fabric in the family room, it had to be a material that could easily be bleached," adds Ralph. Ralph grounded the cream walls (Benjamin Moore's Seapearl, OC-19) with a berry- and coral-colored vintage kilim rug.

Ralph says there wasn't a lot of opportunity to add color, texture, or personality in this entry hall because the space is only so big. She took every chance she got here—including painting the floors. When it comes to taking the plunge with painted floors, Ralph says the decorating move isn't as permanent as it seems. "The paint will wear off over time, and I think that only adds to the character of the house," she notes. "You can always paint over it. So if you get tired of it, you can change it." Ralph used Benjamin Moore's Dove Wing (OC-18) and North Creek Brown (1001) to paint the checkerboard pattern.

First, Ralph rounded up the family's collection of fishing-tournament awards—all saturated aquatic paintings—to create a gallery feeling in the den. Then she covered the walls and sofa in a shade pulled straight from the large piece of artwork in the center. Benjamin Moore's Summer Nights (777) coats the walls. The sofa's fabric is an indoor/outdoor velvet by Halsey & Spruce. Matching the sofa to the wall color was the key to preventing it from overwhelming the room. "I knew the sofa would take up a lot of space because we wanted a nice, deep spot for the whole family to pile on," Ralph explains. "I broke up the monotony of blue by pulling in patterns in different shades. I think you can be a little less reverent about the color combination if the scale is right."

In the living room, Ralph set out to design a more formal space for entertaining while maintaining a playful, unstuffy spirit. "Everything needed to work together, but each space had to have its own personality," Ralph says. "I wanted the home to feel like a youthful, whimsical family lives here." She proved that color, pattern, and texture can work in a formal space by combining them all. Chairs with velvet slipcovers rest next to a burned-wood side table. The rustic side table was made by a local tree-care company (clemmonstreecare.com) that turns cut wood into furniture. Pillows covered in perky fabrics enliven the stately Empire sofa, and crisp white trim painted in Benjamin Moore's White Dove (OC-17) frames a warm burlap wallpaper from Schumacher.

The homeowners wanted a restful retreat in the primary bedroom, where Ralph proved that bold doesn't have to mean loud. "I tried to tone down the contrast a little," she says. "The blue is certainly still vibrant, but it feels more neutral and serene in the setting." The designer then added layer after layer to bring in more personality and warmth. She topped a muted natural-blend rug with a furry flokati one, covered the walls in a textural Phillip Jeffries grass cloth, and freed up valuable real estate on the bedside tables by mounting swing-arm sconces from Circa Lighting above them. "We wanted something geometric and textured, so the rug is actually made of both sisal and wool," Ralph says. "That way, when you step on it, it still feels really soft." 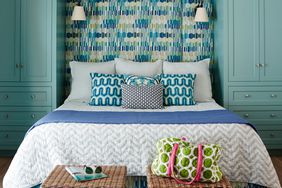 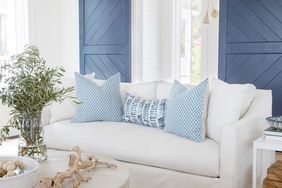