Anna Braund never intended to build a home from scratch in Roswell, a charming time capsule of a town with a wealth of buildings dating to its founding as a cotton-mill village in the late 1830s. After all, she'd bought a ranch-style house on an oak-lined property in the historic district that had everything she wanted in a home: namely, a floor plan conducive to entertaining and a location within walking distance of shops and restaurants. After Braund hired local architect Lew Oliver to draft the renovation plans, the team discovered some unforeseen issues that would call for a ground-up rebuild. "When you're building in a place like Roswell that has so much history and character, you want to create something with soul that's in keeping with the area," says Braund, an interior designer who hails from the town originally.

Oliver switched tracks, embarking on a new design to incorporate the best elements of the local architectural traditions—a modest footprint, high ceilings and doorways, large porches with paired columns, and a symmetrical composition with a trio of French doors in front—but with a modern twist. He traded the closed-off, narrow rooms of the past for an open-plan kitchen and dining room (for more fluid entertaining) and chose wider windows than those in Roswell's older homes to bring in more natural light. (In the age of air-conditioning, abundant sunshine is no longer such a negative.)

The inspiration for architect Lew Oliver's 2,500-square-foot design? The property's classic white barn (shown in the background above), which is now used as a potting shed. See a similar house plan (with a fourth bedroom!) by Oliver here.

Braund sees porches as extensions of indoor spaces. In light of that, architect Lew Oliver designed her front and back porches with generous dimensions—both are 10 feet deep. "This size creates a whole other space—not a pass-through area but a sit-and-linger room," Braund says.

An open floor plan that bridges the kitchen, dining area, and living room has become a must-have for modern life. "We wanted to create harmonious movement throughout the space so the whole home can be used, not just parts of it," Braund says. A vaulted, beamed ceiling defines the dining area. Rather than sourcing reclaimed beams, she used new cedar beams to achieve the same look more easily and less expensively.

"When you work with a palette of beautiful raw materials, they speak for themselves—you don't need a lot of color," says Oliver, who used wood floors and soapstone countertops.

An open-plan home calls for a holistic decor approach. "Just like you would repeat a certain color in a room to bring continuity, I repeated certain design elements throughout the house to make it cohesive," Braund explains. Most notably, she carried over the kitchen's walnut shelving into the living room, while the fuss-free plaster treatment above the kitchen vent hood mimics the style and texture of the fireplace surround. Benjamin Moore's Swiss Coffee (OC-45) covers almost every one of Braund's interior walls.

Play Up The Personal

The decor centers around personal touches and down-to-earth materials. "I'm drawn to things that feel real and straightforward and honest; I don't like a lot of fuss," Braund says. "All the attributes I admire in people, I seek out in objects as well. We should surround ourselves with things that reflect our values." Fittingly, every piece of art featured in her home was made by a close friend, and sentimental collections of family heirlooms figure prominently. The rattan dining chairs around her table are the same ones she grew up sitting on as a kid in her parents' home.

In a house with a narrow floor plan and no basement, maximizing storage space is key. "I read a lot, so we put built-in shelving anywhere we could—in just about any niche and corner we could find," says Braund. One particularly novel application of the idea? The "secret" door to the crawl space beneath the stairs doubles as a movable bookcase.

"I love a small bedroom. I see it as a cocoon," Braund explains. High ceilings, tall windows, and white walls achieve an effect that's comforting, not claustrophobic. She also hews to the rule that in a smaller space, less decor is more.

Even designers don't get to have everything they want in their own homes. The question becomes how to get something with character on a budget. Here's where Braund went big—and where she scrimped.

In lieu of a custom built-in, she put her great-grandfather's old chest to work as a butler's pantry in the hallway.

Enjoy The Thrill Of The Hunt

Simple white linen Roman shades provide privacy without as much fabric (or as hefty a price tag) as curtains.

To ensure her powder room makes a big impression on guests, Braund selected an antique mirror and sconces. "You can always take special lighting with you if you move," she says.

"We wanted walnut shelving in the kitchen, but solid walnut shelves are very expensive," she says. "Instead, we did a veneer, which brought in warmth but saved a lot on the price." 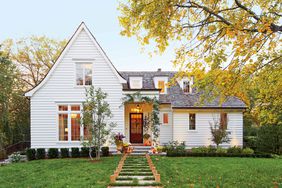 This Nashville Couple Showed Us How To Downsize In Style