This 1950s Mountain Cabin Gets a Dreamy Makeover

A run-down cabin makes a comeback as a relaxing retreat in Highlands, North Carolina, thanks to designer Whitney McGregor.

Whitney McGregor is drawn to fixer-uppers. In addition to her interior design business, she rehabs investment properties with her father, who lives in South Florida and requested that their next project be in the mountains. Because McGregor would handle the renovations, she set her Zillow search for a few spots within driving distance of her Greenville, South Carolina, home. She has a keen eye for envisioning the potential in places that others might consider teardowns. "It's 50% intuition—the right house with the right energy. The other half is really methodical," she says.

It was kismet when a 1950s cabin in Highlands, North Carolina (less than two hours away from her home), popped into her inbox. "I don't know how it lasted on the market for a year, because we snatched it up right away. It was a hidden gem," she recalls. "Though it was neglected, I could tell that someone had taken a lot of care in building it." After an inspection confirmed that the 2,000-square-foot home had sturdy bones, she was all in. The renovation coincided with the beginning of the COVID-19 pandemic, so when work for her clients was put on pause, she was able to pour her creativity into her own project, which she dubbed The Halsted House (you can follow along on Instagram, @thehalstedhouse). "I wanted to show another side of me, to honor the area's look but also make it mine," she says. The interior's wood paneling became the backdrop for McGregor to experiment with her ever-evolving style, combining her collection of antiques and thrift-store finds with calm but still cheerful patterns to make each room as comfortable and inviting as the next. The designer says that because she would also be renting out the house, "There was the consideration that nothing could be too dear, which I think makes it more cozy." Here, she shares her cottage decorating ideas. 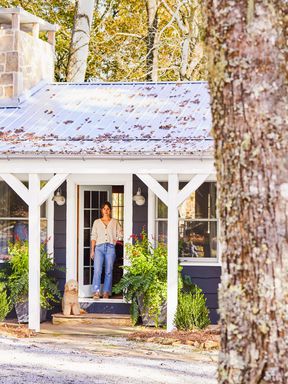 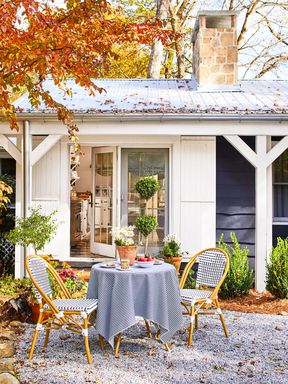 Let the Location Guide You

The tired red exterior needed a refresh, but not just any color would work in this setting. "The mountains are rustic. I would have loved a little white cottage, but that was out of the question. We get heavy downpours at the drop of a hat and dirt and mulch flies up, so white was out," McGregor says. She landed on a darker, more functional shade for the siding (Farrow & Ball's Off-Black, No. 57) that would disguise inevitable outdoor elements. McGregor intended on keeping the original roof, but after discovering rotten wood underneath while replacing the chimney, she sprung for a new metal one. The designer recruited her mother to help give the landscaping a total overhaul: "You could see remnants of cool plants and some charming curb appeal happening, but it had been so neglected," she says. To contrast the low, angular lines of the house, she laid out a curved stone bed and looser plantings out front. A cafe table, just outside the kitchen, sits underneath a river birch ablaze with fall color. "That tree shines every season," McGregor says.

There was nothing McGregor could do with the living room's wormy chestnut walls except embrace them. "I wanted to swathe them in white paint and call it a day," says the designer. But because that is now a rare type of wood, she was advised to take the walls down and sell them instead of painting over them. "This is a mountain cabin, and the wood is cozy, so I decided to roll with it and keep the walls," she adds. It was her dad's idea to extend the stone chimney to the ceiling, which created a focal point for the long room. Cool gray stones with white mortar help counterbalance the warmth of the wood. A crisp white sofa and chintz slipper chairs also brighten the space. She favors ottomans over coffee tables. "I want people to lie back and put up their feet. Comfort is my number one goal," she says. 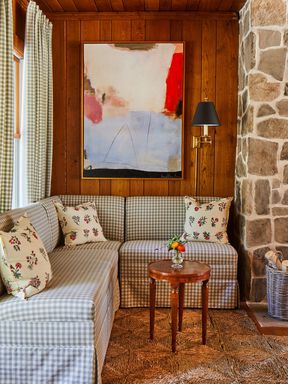 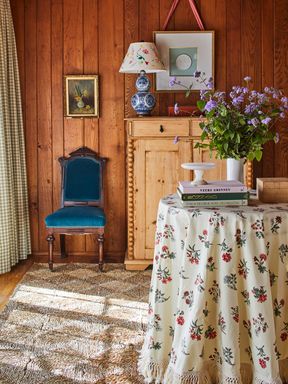 "I start with a floor plan for every room I do. I knew I'd have to break up the living room because it was so long, but I had this clear focal point in the middle," McGregor says. She designed three sections: a checked banquette in a corner beside the front door, a central sitting area in front of the fireplace, and a skirted table behind the sofa.

"For investment properties, I look for things that I can keep and use, because I like to save in one place so I can spend in another," McGregor explains. Holding onto the existing cabinetry and hardware meant she could splurge on new flooring after finding water damage behind the dishwasher. She reimagined the original black-and-white checkerboard pattern using marble and pulled inspiration from European-style freestanding kitchens: replacing the upper cabinets with open shelving, rolling in a stainless steel island (topped with salvaged butcher block) for extra prep space, and hanging a pair of rise-and-fall pendants. Adding crosspieces to existing exposed beams on the ceiling created the look of floor joists. Painting the rest of the room Farrow & Ball's All White (No. 2005) lets the flooring shine.

The banquette (one of McGregor's signature touches) offers additional spot for sipping coffee or chatting with whoever is cooking.

Have a Little Fun

A respite from all that wood was welcome in the dining room, where McGregor felt free to paint over the pine paneling (with Farrow & Ball's Wimborne White, No. 239) and cover the previously bare walls with a patterned paper by Colefax and Fowler. "The sun rises out those windows, and it just glows in here in the mornings," she says. The antique table and chairs were estate-sale finds. "Over the years, I'd gathered images of froufrou pleated slipcovers over French Louis-style chairs like this and thought this was my chance to do it," says the designer, who studied and lived in France. The renter-friendly cushions are covered in an indoor-outdoor fabric, which can be removed and thrown in the wash.

"This room is a testament to picking things that you love and that speak to you," McGregor says. "As long as the scale is right, they do work together if you stay consistent." A friend gave her the grid of artwork as a housewarming gift. The ottoman's yellow floral pattern didn't scream "mountain house" to her at first, but it reminded her of the area's colorful summer wildflowers (plus, it looked too good with the blue-and-white striped sofa to pass up). Plaid carpet offers a soft place for kids to sprawl out when playing games. McGregor kept the lightly washed wood paneling in the den, which she believes was formerly a screened porch.

"Outdoor furniture can be tricky. When you don't have as many elements as a normal room (such as wallpaper and drapes), every piece has to make an impact," McGregor says. To help the porch feel more like an actual room, she added a French-style sofa, a pair of slipper chairs from Ballard Designs, and a wicker coffee table. "Indoor lighting in an outdoor space makes it feel like you're inside," says the designer, who placed lamps on the vintage side tables (with one doubling as a bar cart). It's just as alluring for evening cocktails as it is for morning coffee while watching the sun rise over Whiteside Mountain. 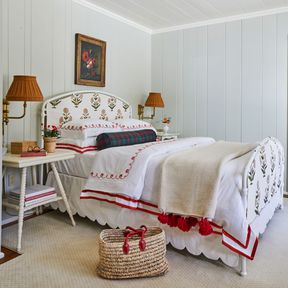 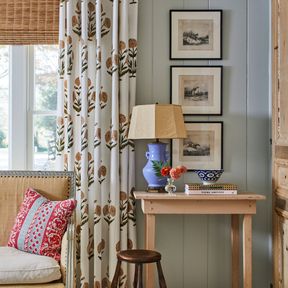 Former owners had removed a wall between two bedrooms to make a one large suite, but McGregor put it back up to have an additional guest room. The new main bedroom came together by "happy accident," as she describes. A totally different set of furniture came in here at first, with the iron bed in another guest bedroom with wood walls, but neither space was working for her. "One afternoon I was like, 'Eureka! I know what's wrong!" she says. Switching the furniture sets made all the difference, and the iron bed felt right at home against the soothing gray walls (Cromarty, No. 285 by Farrow & Ball). She picked a favorite fabric from her inventory to make the bed's a slipcover and matching draperies. Red detailing from the Schweitzer Linen bedding was pulled from the painting above the bed. "That room needed a little zing," McGregor says. At the other end of the room, she decided the settee, scored on Facebook Marketplace, was worth a drive to Alpharetta, Georgia, to pick up.

Speak To Your Surroundings

"This space feels very much like the Highlands plateau area to me. I wanted it to feel cottage-y," McGregor says. After taking this bath down to the studs, she added what looks like outdoor siding to the walls (White Tie, No. 2002 by Farrow & Ball). She kept the bath's original marble slab for the vanity and added a skirt to the wooden base. Using the same fabric for the sconce shades to tie the look together.

"Whenever my family is planning to rent out a place, we look for versatility. A room with twin beds is always great because we can put two kids in there," says McGregor. When her son graduated to a big-boy bed, she brought his antique twin pair to Highlands. Before, the wood flooring had been given a semitransparent green stain. "I love a white-painted floor, but it's super impractical—you can see everything. I wanted to make it as dark as I could stand while still feeling white," says the designer, who chose Farrow & Ball's Vert de Terre (No. 234).

Making the rest of the hall bath work around the original pink tub (which McGregor was determined to keep) was one of the biggest challenges of the renovation. When her initial vision wasn't going to plan, she said, "I'm just going to do the next right thing." That mindset helped make decisions on complementary details like the white subway tiles for the shower and the wallpaper. Instead of tiling the floor, she kept the wood, taped out a design, and stained it. 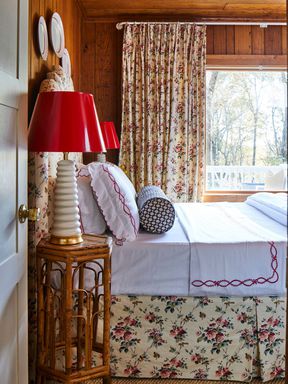 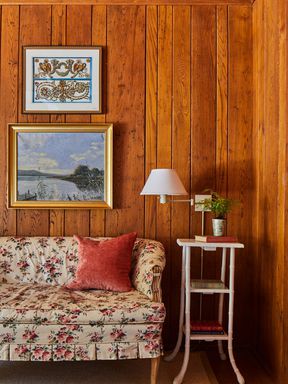 Originally in the main bedroom, the floral pattern can hold its own against the natural wood walls. "I love the play of masculine wood paneling with floral, feminine headboard," McGregor says. "I'm a big red person," says the designer, who plucked the bold shade from the print for the Schweitzer Linen bedding and glossy Sorella Glenn lampshades. An antique French settee (covered in the same fabric) offers a soft place for guests to land.

In the bath off the bedroom in the carriage house, McGregor played up the old-school teal fixtures rather than ripping them out. "I wanted to keep plenty of those original things that made this house so special to begin with," she recalls. The leafy Lee Jofa wallpaper above the wormy chestnut paneling speaks to the surrounding landscape. "Here you feel like you're in a tree house, so that pattern seemed fitting. When you look out the windows, it's green everywhere," she says.