This Stunning, 275-Year-Old Charleston Home Just Hit the Market for the First Time

Meghan Overdeep
Meghan is a senior staff writer at Southern Living. She has been scouring the Internet for the buzziest Southern news since joining the team in 2017. She has never met a story she couldn't tell. Meghan is passionate about animals, current events, history, gardening, and making people smile. You can find her skiing or taking pictures of her dog.Previously, Meghan was the weddings editor for The Knot. She also worked for many years as a freelancer with bylines at InStyle, The Food Network, HGTV Magazine, Runners World, and more. She graduated from Syracuse University with a B.S. in Magazine Journalism.
Southern Living's editorial guidelines
Trending Videos

Owned by only three families in the last 150 years, and never before on the open market, the landmark Capers-Motte House at 69 Church Street is a rarity in more ways than one.

Once the home of renowned painter Alice Ravenel Huger Smith, this meticulously maintained old-world stunner is one of the largest pre-Revolutionary houses in Charleston. Historically and architecturally significant, this masonry double house was built circa 1745, and is notable for its glamorous ballroom, drawing room, cypress paneled library, 15 fireplaces, King of Prussia marble fireplace surrounds, delft tiles, bespoke woodwork and moldings, and stucco-over-brick exterior. Phew!

Though it's located on one of Charleston's most picturesque streets, don't let the prestigious address dissuade you. This large property is surrounded by high brick walls for perfect privacy. Heirloom camelia bushes dot the charming secret garden set beside the oval in-ground pool—one downtown Charleston's first.

In its 275 years, the property has housed a who's-who of Charleston society. Likely built by Richard Capers, the house was later purchased by Colonel Jacob Motte, who served as treasurer for the colony for 27 years. In 1778, it was occupied by Colonel James Parsons, a member of the Continental Congress who was offered the vice presidency of South Carolina before the formation of the United States. The house was extensively damaged during the Civil War. Then, in 1869, the widow Eliza Middleton Huger Smith purchased the property, and restored it. Her granddaughter, Alice Ravenel Huger Smith, became Charleston's first chronicler of the city's architecture and is one of the most celebrated artists of the early 20th century Charleston Renaissance. Many of her watercolors and sketches depict scenes from the windows of 69 Church.

The current owners purchased the house in 1998 and undertook extensive renovations to bring the pink stucco house back to its current, and former, glory. Today, 69 Church Street is currently on the market for a cool $9.995 million.

Join us for a tour, won't you?

In the ballroom, extraordinary examples of woodwork from both the Georgian and Federal periods, are illuminated by the natural light that floods in from the double sash windows.

The home's original staircase spirals up throughout all four floors.

Prior to the construction of the historic state house in 1791, it is believed that meetings of the Commons House of Assembly were held in this second-floor drawing room.

A regal green hue sets the formal dining room apart from the rest of the rooms in the main house.

Examples of the home's original wood paneling can be seen in the cozy library.

Two Houses in One

Typical for the time in which it was built, the kitchen is located in a separate house. A butler's pantry and a purposefully spartan connect the two structures as a reminder of the home's original footprint.

The more rustic kitchen house has a family room of its own.

Here you can see that the third-floor ceilings and windows are the same height as those on the first two floors—an unusual feature in a historic home.

All bedrooms have en suite bathrooms, another rarity in a historic home.

The entire property includes 8,524 square feet of living space, with seven bedrooms and eight full bathrooms. There are two bedrooms with two full baths in the original kitchen house, perfect for children, guests, or live-in staff.

The large oval pool is accessed through a hidden opening in the towering podocarpus. It's surrounded by Gothic-Revival-inspired privies, one of which houses a pool powder bath. 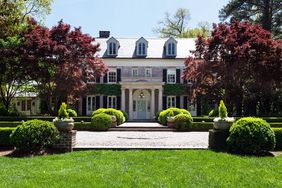 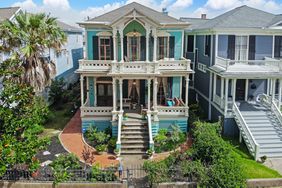