Even if you absolutely adore your home, it's likely that there is some area or aspect of its exterior that you feel needs a little more attention. Whatever you thought of your house when you first bought it (or maybe you grew up in it!), there will probably come a time when you decide it's time for a change—whether you feel it's outdated and in need of more modern fixtures, or you are simply in need of some new scenery, or you want to make the house more trendy and attractive to potential buyers or renters. These exterior transformations will inspire you to pump up your own seaside curb appeal for that perfect first impression.

These homeowners prioritize outdoor living. That means the all-grass ground cover of this backyard space wasn't quite right. The space needed some variety.

The transformation created a grander and more defined patio with separate areas for sunning and lounging. Extra hardscape makes the space much more usable at all times of the day. It's perfect for hosting a crowd!

Four separate stairways descended down onto this pool area. It created a busy and confusing backside for the home. It needed to be updated and simplified.

Streamlined access to the pool area made more sense. Then, a lightened-up façade and manicured lawn transformed the space. These changes took the space from drab to cozy, cohesive, and downright fabulous.

This cottage was set on a lush green plot of land. However, the monochromatic exterior and unbalanced landscaping weren't quite doing the home justice. This home deserved more spotlight.

The cottage was given a new gray roof and cozy blue shutters. Wrapping pretty shrubs around the house also helped to give this cottage contrast. Now it finally has the welcoming aesthetic it deserves.

This ranch-style home was a little outdated. The shrubs were overbearing and obscuring. It needed a modern update to make it feel fresh and current.

This cozy cottage scored a white picket fence, half-moon gate, cute pathway, and new landscaping. And, with that, it became a garden paradise. It also gained a second floor with windows that overlook the inviting entrance.

This would-be classic home suffered from mold damage. It desperately needed to be revitalized.

A coat of white paint and dreamy landscaping brought this charming cottage to life. It still maintains its original character-infusing details such as the arched doorway and gabled rooflines. An extra dormer window also helps the home appear more balanced.

This sprawling 1960s bare-bones home had little character. It was also in danger of being torn down. A makeover saved it.

This outdoor space had lots of potential. It had walls of windows and (dated sliding glass) doors that open directly onto the patio. But unnecessary walls made the space feel divided.

After ditching the dividers (and adding a wicker patio set), the owners now spend nearly all their time outside. "We have our coffee there in the morning and our lunch there in the afternoon," says the homeowner. "We pretty much live out on the deck whenever we're here."

This near-tear-down had no floors, no interior walls, and no windows. It was practically falling apart. So, it required a major overhaul before being habitable.

This closed-off villa didn't allow any ocean breezes to flow through. It truly felt out of place in sunny Rosemary Beach, Florida. The trees and shrubbery surrounding it needed to be pared down.

Louvered shutters quickly fixed the air flow problem. Plus, a white stucco exterior with dark wood accents brings on the beachy vibes. Now it's a house worthy of the seaside.

Raising the Bar: Before

This tiny home sat too low. It was also was too hidden behind vegetation to take advantage of its water views. Plus, its small footprint didn't jibe with the family's space needs.

Raising the Bar: After

Instead of building out, the homeowners built up. This created more room in the once-cramped home. They also added walls of windows to let in abundant sunshine and show off the prominent water views.

Small windows made this cottage feel cramped inside. Moreover, it felt uninviting on the outside. And the dated style didn't match the owner's aesthetic.

A complete overhaul transformed the cottage into a much more contemporary structure. It now has lengthy windows and more height. Plus, its fun shade of blue really pops against the natural wood siding.

This two-story 1940s cottage had charming details, but it simply wasn't large enough for its new owners.

This South Carolina ranch house was hidden behind a dark brick façade. Moreover, it didn't feel quite right in its coastal setting. It definitely needed more beachy vibes.

After a coat of Shoji White from Sherwin-Williams, the brick exterior feels bright and modern. The lighter shade also accentuates the home's prominent exterior features, like the trellis and front porch. It also contrasts nicely with the surrounding greenery.

The sun-bleached wooden deck of this home felt uninviting and unusable. It was dead space on one side and a view-blocking wall on the other. Something more open and welcoming was needed.

The home got a fresh coat of paint and an extension of the deck on both sides. This made it a much more hangout-friendly space. Plus, potted plants add life and warmth. 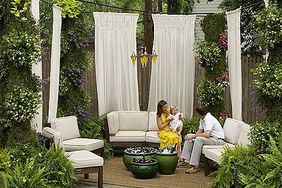 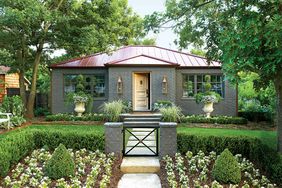