A former corporate public relations executive and co-founder of a SoCal-based marketing firm, Andrea Nordstrom Caughey has had a lifelong passion for homes and gardens and has spent the last three decades producing national stories about fascinating locations from coast to coast.

As longtime fans of old homes and small towns, Renee and Charles Bullock always dreamed of owning one of Edenton, North Carolina's famed Cotton Mill Village houses, which were originally built for workers at the now-closed textile plant. "We loved the neighborhood's sense of community," recalls Renee, and after 10 years, they got lucky and nabbed a foreclosure in 2017.

Built in 1916, this 1,500-square-foot cottage used to be a duplex—notice the two front doors—and required lots of work, which the couple took on themselves. Learning as they went, the Bullocks devoted two years' worth of weekends to fixing up the house. Renee (a quality auditor) and Charles (an electrical project supervisor) grappled with strict budgets of time and money, stringent covenants, and a small footprint. See how they pulled together this vacation home.

The cottage that the couple found had so much potential but was going to take a lot of time and work.

The Bullocks made the front of the house structurally sound and enhanced its old-school charm. Renee says, "We replaced rotten decking with 3-inch tongue-and-groove boards." The new posts with chamfered edges match all the other buildings in the neighborhood. A pair of antique doors (found on Craigslist for $150) and steps with proper risers are some small improvements that had big payoffs. The couple also replaced the front walk, coated the aluminum roof, and focused on beautifying the landscape.

Dark and dated, the kitchen had lots of room for improvement. The lower cabinets were troublesome and the couple definitely needed to think creatively for more storage.

"The existing upper cabinets in the kitchen were okay, but all of the lower ones had to go," says Renee, who replaced them with a similar style of stock cabinets from Lowe's. Adding trim to the bottom, crown molding to the top, and three different styles of hardware made them look custom. "We used knobs on all the uppers, handles for the single drawers and doors, and cup pulls for the cabinets with three drawers," she says. The Bullocks also replaced their countertops themselves with a laminate from Lowe's that looks like marble, upgrading the look with an ogee edge. "We were really thrilled with the wide selection available today," Renee says. The couple did select quartz for the island (which was made by Charles) after unearthing a beautiful $300 remnant at a local stone supplier. To be certain they chose the right piece (because remnants can't be returned), Renee went to the store armed with exact dimensions and some cabinet paint samples. The Bullocks redid all of the kitchen countertops for less than $1,000.

A bank of new cabinetry on an empty wall opposite the stove created a coffee bar and added some extra storage.

Never overlook the hallways, especially in smaller homes that need attention given to every detail. To start, the tiled flooring needed to be replaced and Renee knew a great coat of paint could turn these walls around.

One night when she was alone, Renee decided to try removing the tile in the hallway. "I pried up one tile, and six or seven came with it. Then, it was just too late to turn back!" she recalls. "Most of the mortar came up on its own, so we didn't have to sand or grind." The couple installed ½-inch plywood floors, cut into 5-inch-wide strips to fake the look of old hardwoods, and finished them off with two coats of primer and Sherwin-Williams' Porch & Floor Enamel in Repose Gray (SW 7015). "While none of this work looks completely perfect, neither is the house," admits Renee.

Most of the rooms in their house needed only a handful of cosmetic improvements, and they elected to have the floors professionally sanded. But they decided to stain and seal them on their own. Renee recommends using a 50-50 mix of Minwax's Weathered Oak and Provincial stains, topped with that brand's floor polyurethane.

The dining room brings together secondhand and bargain-store pieces. The vintage table was a lucky Craigslist find that matches Renee's old china cabinet exactly. For a modern touch, she bought a deconstructed rug and new Windsor chairs from Target. "The clean look works so well with the age of the home," she says. An antique brass chandelier in the dining room gives the space extra charm.

One of the first projects that the couple tackled was to update the main bedroom so they would have a place to sleep, eat dinner, and watch TV during their many weekend working visits. After "bingeing on Pinterest," Renee figured out the look she wanted. "I found that I was mostly pinning pictures of light, bright, and serene rooms," she says. The first step in the decorating process was painting the walls Sherwin-Williams' Pure White (SW 7005). Then the rest of the furnishings came together from browsing art.com and scouring sales at sources like Target and Wayfair. Basic white drapes finish the no-fuss bedroom. 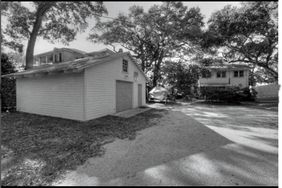 This Designer Turned a Rundown Garage into a Charming Guesthouse