The Lafferty and Bernard families have never met, but if they did ever happen upon each other, odds are high that it would be on a nature trail.

Both couples recently retired to the South and built homes in the middle of expansive woods featuring walking paths and stunning water views. For Pam and Jed Lafferty (who landed in Cape Charles, Virginia), a swath of sand and the Chesapeake Bay glitter behind their home. Mary and Tim Bernard's place in South Carolina is accented by ancient live oaks that are tinseled with Spanish moss and miles of deepwater river.

Those outlooks demanded windows—and lots of them. The Laffertys and the Bernards both lit upon Old Oyster (SL-1934) from Southern Living House Plans, lured by its ample supply of those, plus spacious porches and decks on the back. And it should come as no surprise that the retreats they crafted in these magnetic natural settings put out a siren song to their families. "Our grandson comes in the front door and goes right out the back with a fishing pole," Pam says.

If the Laffertys knew one thing about their future, it was this: They would retire to Rehoboth Beach, Delaware.

That's the site of five generations of memories, thanks to grandparents with homes there and years spent taking their own two kids and grandchildren to the coast on summer holidays. As the Laffertys, who previously lived in West Chester, Pennsylvania, approached retirement a few years ago (she from a job at QVC and he from an agricultural-science company), they toured real estate listings in Rehoboth Beach during their annual vacation. And that's when they realized it had a popularity problem.

Then one day in 2018, their daughter suggested looking into Cape Charles, Virginia. On the four-hour drive back home after visiting her in Richmond, Pam took a detour. Figuring that the town must have great water and beach access, she decided to zip through.

"I came across the Chesapeake Bay Bridge-Tunnel, saw the sign for Cape Charles, and drove right through it down the main road," she recalls. "I hit the bay and stared at the dunes. Then I turned the corner and saw the LOVEwork sculpture and thought, 'Wow. You can see the bay, the fishing pier, and the harbor.' " She drove out of the small town convinced. After a two-week visit, Jed was too. The couple spotted a lot just a few-minutes' walk from the bay and decided that if they could buy it, they would be committed. By the spring of 2019, it was theirs and they were walking the dirt, describing the Old Oyster house plan they had chosen to their son and their daughter and her family.

"It has a very classic Lowcountry style with porches and a big center hall," Pam says of the plan, which made architectural sense with the historic buildings in the nearby downtown. With visions of Chesapeake Bay whitecaps and sunsets in her mind, she made one big adjustment: flipping the second floor of the plan to put the two bedrooms in the back so they open onto a deck—and that view.

While Pam masterminded the interiors, Jed, whose background is in agriculture, got his hands in the dirt on their lot and the local preserve. "A naturalist and I formed a stewardship club, if you will," he says. The group helps maintain the area's scenic beauty and has installed bluebird boxes along the trails. Jed found a community too. "That's where I met some of our neighbors for the first time," he says. "With COVID, we weren't going out, but we could meet up with people walking, riding bikes, or hanging out at the beach."

The Laffertys are still new to this way of life. "We're just starting to get a taste of what it's going to be like here," Pam says with a grin.

The Best Day, Every Day

San Francisco would be a hard act to follow. When the Bernards moved west from their longtime home in Pittsburgh, Pennsylvania, they relished life in the middle of the California city. With retirement only a few years away, the couple visited the bigger coastal towns of South Carolina (near Mary's parents and sister), looking for more of the same. Hilton Head Island, Beaufort, Bluffton—they hit them all and liked them.

But then, on a whim, Mary toured Spring Island. "When you come out here, there's a whole different vibe. It's a nature preserve where people live, and it's really something we had no idea we wanted until we saw it," she says. Tim fell just as hard for the 3,000 acres of largely untouched nature, the low-density development, the community farm, the mix of deepwater river and marsh views, and the residents. "The people here are so interesting," he says. "They're fun to be around and learn new hobbies from."

In May 2014, the Bernards bought a lot framed by two grand live oaks and imagined their home sitting exactly between them with the limbs arching over the roof. To bring this idea to life, only one team would do: Allison Ramsey Architects. The house plans had the open-to-nature features they wanted, but Old Oyster checked all their boxes: a first-floor main bedroom, a dedicated entertainment room away from the primary living spaces, and deep porches on both levels that would look out on the 5-mile view of water that their 2½ acres offered. 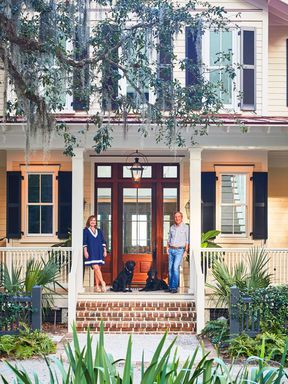 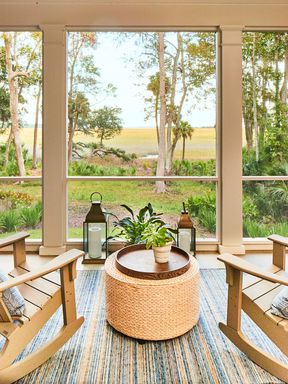 For parties, they opened up the kitchen, family, and living rooms to one another. They closed in part of the front porch to create a mudroom for wiping the paws of their two black Labs. Enclosing a portion of the other side allowed them to enlarge the main bath and closets. "I'm a clotheshorse and need Christmas storage!" Mary says. "That's the floor we live on—and we're paying for the roof above—so I wanted to use every inch of the space."

They also added a guest suite over the garage, hoping to lure their two kids and their families to visit. In fact, at the start of the COVID pandemic, their son and his expectant wife decamped from New York City to South Carolina (under the advice of her doctor) to safely give birth. The Bernards' daughter also moved in for a few months, staying in a guest room on the second level. In May of 2020, the couple's first grandchild was born—and the Spring Island community welcomed her with a drive-up baby shower.

"Never in a million years would we have guessed that we would be under one roof, but the house expanded with us beautifully," Mary says.

Most days on the island run more relaxed than that, though. Mary and Tim will walk the dogs, stopping at The River House for coffee with friends. Mary might plan the next event for the Spring Island Floral Guild, which she chairs. Tim may work for a bit before firing up the smoker and inviting a few couples over for dinner. One of them could even sneak to the back-porch bed for a nap. "It's both a typical day and an ideal one," Tim says.

A Closer Look at Old Oyster

It's tough to get a more iconic coastal look than the two-story, 3,951-square-foot Old Oyster plan (SL-1934) developed by Allison Ramsey Architects. The wide front porch opens to a double-height foyer that extends into a classic center hall that separates public living spaces from private. "You can look in the front door and see out the back, and right away you get a sense of where you are," says Pam Lafferty. At the rear of the house, two levels of screened porches (one with a fireplace) frame water views and capture the breeze. A first-floor main bedroom makes this an ideal family getaway; guests have the entire second story to themselves. 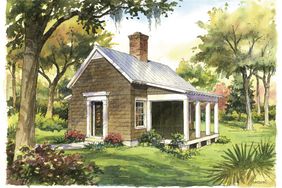 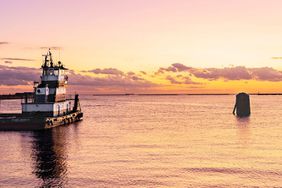 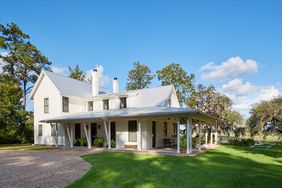