And it sleeps seven comfortably.

Kathryn O'Shea-Evans is a freelance writer whose work is frequently published in The Wall Street Journal, The New York Times, House Beautiful, Elle Decor, and numerous other publications. She is the author of Veranda: Elements of Beauty (October 2020), Veranda: A Room of One's Own (April 2019) and many co-authored titles for Rizzoli New York. She has appeared as a guest lifestyle expert on The Today Show, The Meredith Vieira Show, The Travel Channel, CBS, The Weather Channel, Fox & Friends, and MSNBC. Every summer, Kathryn is an instructor at the Columbia Publishing Course, at Columbia University's School of Journalism. Kathryn holds a master's in journalism from Harvard University's Extension School. Follow Kathryn on Instagram at @KathrynOSheaEvans and on Twitter at @ThePluckyOne.

Leave it to a designer who spent her childhood summers on concert tour buses to make a dated, cramped space look worthy of a ballad. "Everything on those buses served multiple purposes; the bench became a table that became a bunk," recalls Nashville-based Hannah Crowell, whose parents are country music stars Rosanne Cash and Rodney Crowell.

The decorator brought her years of spatially efficient vagabonding to this particular home, built in the mid-1980s in the vacationland of Seaside, Florida. It would need to welcome a Dallas couple and their three young children, plus occasional visiting grandparents, all within a tidy 600 square feet. Intentionally opting for cramped quarters may seem counterintuitive (or insane), but Crowell says, "The family fell in love with the house's charm, and it was one of the original homes in Seaside, which makes it extra special."

So how do you make the interior of a seashell-size abode feel as expansive as King Triton's castle? If you're Crowell, you paint every inch of the place in the same bright, laid-back hue—Benjamin Moore's Decorator's White (OC-149)—and then approach it like the puzzle it is. "I say it's similar to designing for a ship, but to be honest, I've never been on a yacht," Crowell admits. "It's more like designing for a tour bus." Here's how she solved that small-space conundrum. 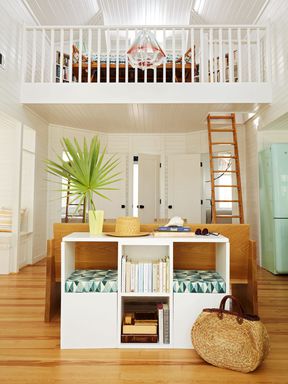 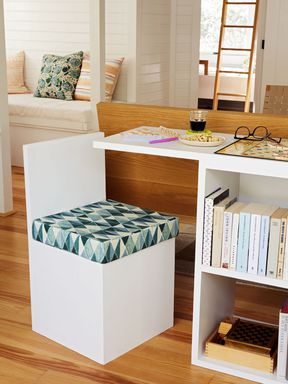 In the living space (not quite its own room), Crowell designed a custom bookshelf meets console with stealth pillow-top seats that pull out to turn it into a game table or extra dining spot. The double-duty ingenuity continued in the bedrooms, where a tailor-made armoire provides accessible storage in the primary. The ladder to the upper bunk in the kids' room detaches easily so it can be used to scuttle up into a lofted owner's closet.

Do More With Less

With minimal square footage, the open living-and-dining area ran the risk of feeling cluttered. A thin-silhouette settee (Crowell designed this one herself and had it fabricated by Good Wood Nashville) and an accent chair in the same blond wood tone help lighten the room's appearance. A shape-shifting dining table further enhances the home's space smarts. "That Ligne Roset table is really cool because it transforms into all different shapes—long and skinny or more of a flower," Crowell says. 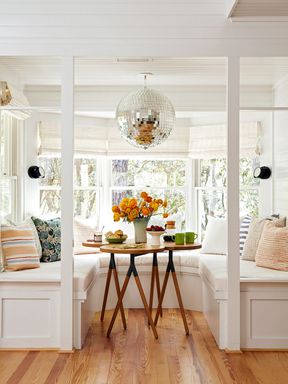 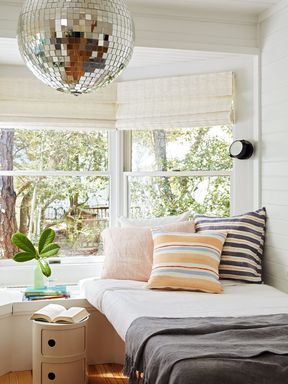 Try Sleeping Where You Eat

Crowell designed the dining nook as a de facto transformer: Hidden under the seat cushions, storage abounds. (It's actually one of the owners' closets!) Come nightfall, slats pull out to convert the banquette into a twin bed. "It lets you pile more people in there if you need to," Crowell says. Hard-wearing seat cushions clad in Sunbrella fabric stand up to spills.

Above the U-shaped dining nook's secret storage, a glittering focal point steals the show. "The client didn't give me a long list of desires for the project other than the disco ball, which I was adamantly opposed to at first," Crowell says. "But it ended up being my favorite part."

In the 56-square-foot kitchen, she maximized the cramped area by swapping out standard-issue appliances for apartment-size versions. A 24-inch Bertazzoni gas range did the same job as the 30-inch original, while a 23-inch prep-size sink saved precious counter space. Even the fridge, typically an average-looking workhorse, became a wow moment in the form of a bold mid-century-inspired Smeg. "It's taller than a normal refrigerator but a lot thinner, so it fits perfectly," Crowell says. Her room-saving tricks also included adding a dishwasher drawer from Fisher & Paykel (a helpful appliance the kitchen had previously lacked). 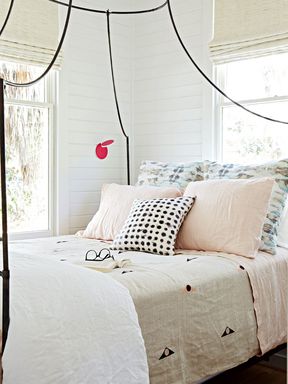 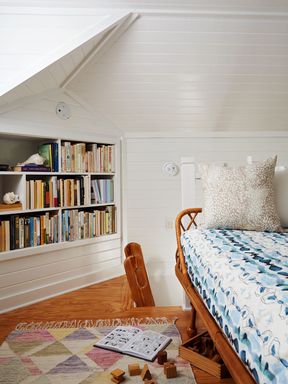 "This modern take on a canopy bed is airy and less structured," Crowell says of the Anthropologie berth in the primary bedroom, which emphasizes the ceiling's height with its slender, elegant form. The bed is dressed up with a simple block printed coverlet from Caroline Z. Hurley, who was born and raised in Memphis. Tall windows clad in Roman shades also play up the room's vertical assets and allow ample natural light to pass through. The bright pink Koncept sconce is mounted on the wall and pivots for practicality.

Another vertical move was the loft. Transforming the space into a reading nook allows it to be a contemplative reprieve from the hubbub below, complete with bookshelves cut into an alcove.

Bring On The Bunk Beds

Crowell's custom bunks in the children's room are a timeless small-space solution that also nods to maritime adventure (with help from wooden accents and fun bedside sconces). Painting them the same tone as the shiplap walls—Benjamin Moore's Decorator's White (OC-149)—makes them visually recede. 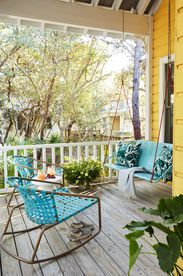 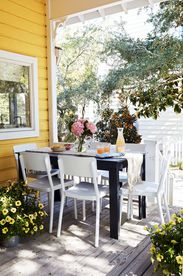 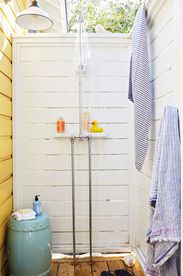 Create A Porch That Rocks

Crowell packed the home's covered porches with creature comforts, including a powder-coated aluminum swing and rocking chairs in seawater blue, plus a six-seat dining table by Loll Designs that's made in the USA mostly from recycled milk jugs. An outdoor shower, which came with the house, makes a handy place to wash the sand from your toes after a fun day at the beach. 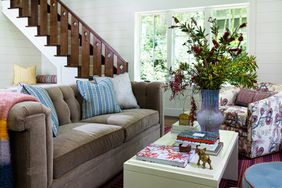 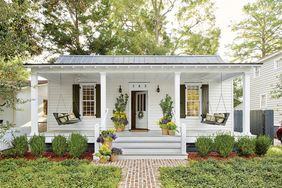