Our First Cover: Finding the Girls on the Bike

For Southern Living's 50th anniversary, we tracked down the two women and their red tandem bicycle seen on our first cover.

On the cover of our first-ever issue in February 1966, we featured a beautiful home in Mobile, Alabama, with two girls on a red tandem bike. This cover, like many others, told a story with its art. It graced coffee tables of many households throughout the South and symbolized the birth of a magazine our readers have come to know and trust. When thinking of ways to celebrate our anniversary, we thought what better way to pay tribute to the years of production that honors and celebrates the South than a trip down memory lane. Fifty years later to celebrate our anniversary, we tracked down Jo Anne Magnes Fusco, Alice McMurphy Jones, and their bicycle built for two. Editor-in-Chief Sid Evans details what it took to track down the women and their tandem bike, and why it embodies the spirit of the 50th anniversary of the magazine.

"One of the most fun stories that came out of our 50th anniversary celebration was when we were going back to the very first issue, and we were looking at the cover, and we decided we were going to try and track down the home in Mobile, Alabama, that was on the cover. We put something out on Facebook. We asked if anybody knew where that home was. And within 48 hours we had gotten back that somebody knew where that home was. And not only that, but we tracked down the two little girls who were riding on a red bicycle built for two in that cover. They were just the most charming women. One of them is in Mobile, the other one lives in Memphis. And the incredible thing was one of them still had the red bike in her garage. We got them back together and to me, it just sums up everything that the 50th anniversary is about." 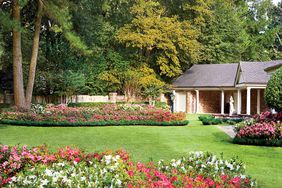