With over two decades of experience, Brigid Ransome Washington is one of food media's most trusted and talented writers. Her unique culinary perspective, sharp recipe development, compelling storytelling and upbeat style draws readers closer to the heart of each subject; be it a recipe, a restaurant, or a chef. She has over 20 years' experience. Brigid's essays, profiles and recipes have been published in Bon Appetit, Epicurious, Food & Wine, Parents, Real Simple, Southern Living, The New York Times, The Washington Post, and more. She holds a degree in psychology and journalism from North Carolina State University and a culinary degree from the Culinary Institute of America. Follow her on Instagram.

Thanksgiving has never been a sit-down affair for chef and restaurateur Kelsey Barnard Clark. When she was growing up in Dothan, Alabama, her parents owned a beach house on the state's Gulf Coast, where both sides of the family would meet up on the holiday weekend. "We didn't set a table. Instead, about 30 of us would eat on paper plates with our legs dangling off a dock," she says. "It was a loud, casual, fun, and absolutely magical potluck."

This was also a time to honor the family's matriarchs through food and memories, something Clark has held dear throughout her life. From when she was attending culinary school in New York to opening her namesake restaurant, KBC, in Dothan; winning season 16 of Bravo's Top Chef; raising two children (Monroe, 4, and Evelyn June, 1) with her husband, Deavours; and publishing her first cookbook, Southern Grit—these women have been her constant inspiration. "So much of my life and business is informed by the example of my strong, hardworking female forebears, like my great-grandmother Sweetie," Clark says. "She always did things differently and pushed for a life where women could have families and meaningful careers."

Mildred Rayford Buckhaults, better known as Sweetie, was a teacher who golfed, hunted, fished, and also cooked every meal for her family of six in Mobile during the early- to mid-20th century. (Many of Sweetie's engraved silver plates from winning golf tournaments adorn Clark's home.) "She was the epitome of the modern Southern woman, long before the region was ever considered modern," says Clark.

Sweetie's easy charm and generosity were reflected in her nickname. It came to be because her husband, Buck, greeted her with "Hey, Sweetie" every day, and the moniker stuck. (Clark recalls that she didn't know her great-grandmother's real name until she was 11.) "She was the one who'd sneak away with me to steal a bite of fresh-carved turkey," Clark says. "I treasure my memories with her and all of the tangible reminders of the person she was." Framed handwritten recipes from Sweetie, as well as Clark's grandmother Marjorie June, line the walls of the chef's breakfast nook. And if there's a singular dish that yokes her ancestral past to her accomplished present, it's Sweetie's Sweet Potatoes, a staple at every Thanksgiving meal.

Her great-grandmother's recipes weren't overindulgent with fats and sweeteners; instead, Sweetie was attentive to the rhythm of seasonal produce. Her self-taught culinary sensibility comes alive most in her sweet potato casserole, which is made with fresh orange juice and zest. "She always smelled like oranges on Thanksgiving, and to this day, that's one of my most enduring scent memories," Clark recalls. Even after many years spent working in restaurant kitchens, she is still rapt by Sweetie's cooking chops: "How did she know that a milder form of acid in this casserole would make it shine?" Clark says the dish is perfect in every way and was one of the few that went unchanged in her cookbook.

"For me, family food traditions resonate on a deep level. I can connect with generations that are 200 years apart with a recipe," she says. "There are some aspects of life in the South that must change. But in recipes, I can keep and tweak them and still be tied to those who came before me."

Clark's Thanksgiving remains the breezy celebration she's always known. "We have a very casual day with Deavours' family at their farmhouse in Rehobeth. Then, my little family heads to our beach cottage, where we enjoy leftovers that night," she says. "It's a sweet and simple melding of my past and present, and I wouldn't have it any other way." 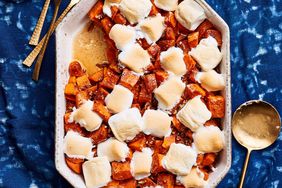 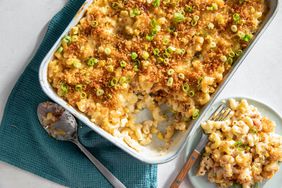