Tradition is something Southerners love to keep around, no matter how much everything else changes, and many of our dearest memories are tied to time-honored traditions we share with our family during the Christmas season. It's all about spending time together, whether you're singing carols with your neighbors, going Black Friday holiday shopping with your mother and sister, volunteering at the soup kitchen on Christmas Eve, or picking out the ugliest Christmas tree on the lot. (Don't get us started on "A Charlie Brown Christmas!") But mostly Southerners love to spend time together in the kitchen.

We're making batches and batches of Christmas cookies, spiced pound cakes that are sometimes soaked in rum, old-fashioned candies like divinity and pralines, and even a congealed salad or two—really, who doesn't love that come-hither jiggle? These vintage desserts bring all the traditional Christmas flavors, and they make an appearance year after year, decade after decade. Because when the kitchen smells like these pecan-studded, cinnamon-swirled, powdered sugar-covered treats, we know it's finally Christmastime in the South.

The name of this recipe translates to "yule log." It's flavored with rich chocolate and coffee and topped with candied cherries. Hint: That's how you know this recipe is really, really old-fashioned.

Thanks to a super creamy finishing touch (buttermilk really is something!), these classic Southern candies stand out from your basic recipe.

These bite-sized bourbon-soaked treats might be the ultimate holiday treat. This recipe is extra fudgy, super nutty, and totally delicious.

Fruitcake might be an acquired taste, but this recipe is as close as it gets to universally beloved. It'll turn even the staunchest of fruitcake-hating folks.

One of the most nostalgic of Southern confections, potato candy is a real-deal vintage recipe worth making at least once.

Ambrosia makes for a delicious take on the classic Christmas dessert.

Would you look at that thing? It's practically dripping with cozy, comforting caramel flavor.

It's not a Christmas party in the South without some form of tipsy treat, and rum balls just happen to be Aunt Birdie's favorite. Originally from our December 1993 issue, this boozy confection recipe is Christmas food gift-material.

"It was the signal that Christmas really was coming when this heavenly smell filled the kitchen," said Susan Houston of Tucker, Georgia. She submitted this family recipe almost 30 years ago, and we just couldn't resist the fluffy (and more crowd-pleasing!) take on holiday fruitcake.

Expect this homemade recipe to deliver crisp, buttery richness and a refreshing minty flavor. Use whichever holiday colors you please.

Put that bowl of decorative Christmas cranberries to work! This simple, crisp-like dessert was sent to us by Sue-Sue Harstern of Louisville, Kentucky, over 25 years ago.

You couldn't fit more Christmas spirit into these cookies if you tried. The recipe is loaded with classic holiday spices like cinnamon, ginger, and cloves. Definitely cookie swap-worthy!

We pulled this colorful, gelatinous recipe from our November 1982 issue. The more maraschino cherries, the better, right?

In the South, it's been a long-held tradition to use leftover cornbread for recipes like cornbread pudding and cornbread with sweet milk. This recipe makes it decadent enough to serve at the holiday party or Christmas feast. Tip: Drizzle leftover Whiskey Caramel over pies and ice cream.

This lost pie of the South was once one of the most popular desserts served in states like Alabama and Georgia. This sliced recipe is a classic version, while our Brown Butter Sweet Potato Pie recipe will look and taste more akin to your Thanksgiving pumpkin pie.

If it's ever appropriate to eat cake at breakfast, lunch, dinner, and dessert, it has to be during the holidays. This cinnamon-filled recipe is a crowd-pleaser.

Get ready for the most heavenly holiday scent to fill your home when baking this dessert. This might not look like your typical hard-iced gingerbread man cookie, but this traditional recipe will win you over with its perfectly spiced batter, fluffy cake-like texture, and ginger-laced whipped cream topping.

This Christmas pie is spiced, boozy, and filled with robust ingredients like green tomatoes, apples, pecans, and cranberries.

Coated in powdered sugar and studded with buttery pecans, these shortbread "snowballs" definitely make the short list for "most Southern Christmas cookie."

Dress up easy cream cheese cookies for the holidays by coating the rolls in festive red or green sugar crystals. In true Southern fashion, a pecan makes the perfect garnish.

Originally a British holiday favorite, this festive dessert is known for its density. It's packed with Christmas spices, dried fruit, and brandy—and we gave it a Southern touch by brushing it with a bourbon simple syrup.

Originating in Germany and Scandinavia in the 16th century, Spritz cookies are crumbly, simple, and iconic in homemade Christmas cookie boxes down South.

These easy and tasty cookies add holiday spirit to the dessert table.

Just like the ones you used to make with Grandma growing up.

Saltine crackers are layered with toffee and walnuts for a sweet and salty holiday treat.

This classic dessert is a spice cake that gets its sweet flavor from cane syrup.

These cookies, also known as Speculoos, will be a favorite of guests young and old. Switch up the powdered sugar design to suit your holiday mood.

'Tis true: Once there was a time when Southerners favored their gelatinous cranberry in a mold rather than a can. This delicacy is retro, fruity, and oh-so jiggly.

It's not Christmas in the South without something that's been decidedly soaked in rum: rum balls, rum cake, rum punch. You get the picture. This coffee-and-rum cake gives a jolt of caffeine with a touch of booze.

These airy confections have been showing up at Southern cookie swaps for generations. Akin to meringues, these candies are made with a base of whipped egg whites and then baked into perfection. 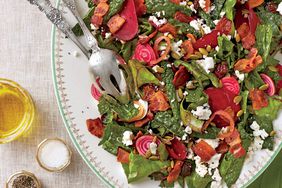 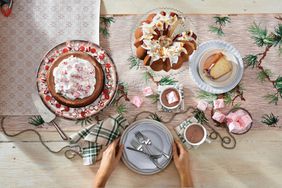 Refreshing and Festive Foods for Your Christmas in July Party 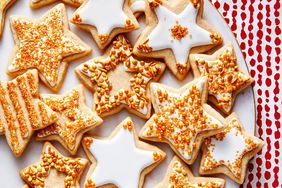