Nashville Chef Laura Lea is Cooking Up Health and Happiness

"Growing up in Nashville, there really was not a restaurant scene, which is crazy to think about now, so we never went out to dinner," says chef and cookbook author Laura Lea. "Instead, we ate dinner at home. My mom is an incredible cook. She’s more talented than I will ever be. So we grew up with this incredible home-cooked food. I wasn’t really the kid trailing after my mom in the kitchen, but I think it settled somewhere subconsciously on the back-burner, that this idea that food is also about community. It’s a safe place and a warm place."

She discovered the power of food for herself—and the benefits of being in the kitchen—after a post-college move to New York, where she quickly found herself disenchanted with the constant cycle of boozy brunches and indulgent dinners out. She started cooking for herself, eventually going to a health-focused culinary school.

Now, living back in Nashville, Laura Lea wants to change the way you think about healthy food too. “The word ‘healthy’ can have negative connotations, but there are so many positive things that come from eating well, like energy, vibrancy, happiness, and great sleep.” In her book The Laura Lea Balanced Cookbook and on Instagram (@lauraleabalanced), she shares healthy recipes that are also approachable and familiar for the home cook—think Stuffed Pepper Soup and Gooey Fudgy Rocky Road Cookies.

“I wanted to bring back a type of food that’s nutrient dense but doesn’t take away from what people really love,” she says. “If anything, they can get the best of both worlds.” With her second cookbook, Simply Laura Lea, hitting shelves April 7, it’s clear she’s done just that. “Even when you’re at a point where you are unconsciously competent as a cook, you still have to be present in the kitchen,” she says. “Cooking is such an incredible way to ground yourself. That’s why I think it brings me and so many other people so much joy.” 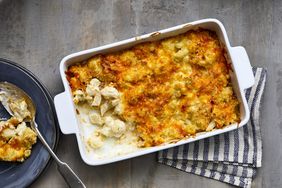