The ‘Peggy Martin’ rose comes with a backstory of resilience and hope.

If you are looking for a pink, climbing rose that's semi-thornless, pretty disease resistant, and can grow more than 15-feet tall, look to the 'Peggy Martin' rose. But this is no ordinary rose. Also known as the 'Hurricane Katrina' rose, this vining beauty also has a backstory of resilience and even sparked a mission. Here's how the 'Peggy Martin' rose continues to thrive in Southern gardens today after it survived one of the most destructive hurricanes in U.S. history.

In August 2005, Hurricane Katrina, a category 5 hurricane, wreaked havoc on New Orleans and the surrounding area, leaving behind massive flooding, $125 billion in damage, and 1,800 fatalities in its wake.

Her parents, Rosalie and Pivon Dupuy, fell victim to the storm. The hurricane roared over Plaquemines Parish, flooding everything in the Phoenix, Louisiana, home where Peggy and her husband, M.J., had raised their two sons. The saltwater poured over the levees and rose up over 20 feet, covering everything for more than two weeks.

Peggy's parents had purchased the 12 acres of land as a fishing camp back in the 1950s, but it eventually became home to this close-knit extended family. For a fisherman like Pivon and a gardener like Peggy, it was heaven. Ancient live oaks, draped in Spanish moss, spread their branches over the land like great arms protecting the earth. The air was perfumed by citrus groves nearby, and the warm waters were alive with fish, shrimp, and oysters.

And it was here that Peggy had planted a beautiful garden filled with old roses—450 of them. Their fragrance, she said, reminded her of her grandmother's garden, and she freely shared cuttings with friends and neighbors. Of all her beautiful roses, only one would survive Hurricane Katrina—and it would play a role in bringing back the gardens of the coast.

When the waters finally receded and Peggy and M.J. returned, their house was crushed. M.J.'s shrimp boat was gone. Where the garden had been, they found mud and blackened stems. But then Peggy spied something incredible—a bit of green growth coming back on a rose she had planted by the shed. She remembers that day so vividly: "When I realized it was still alive, I thought 'My God, how did this live through the storm? Did God do this for me because so much was gone?' "

A Pass-Along Rose Without a Name

That rose, the one Katrina couldn't take, is an 18-year-old thornless rambler with long arching canes and showy pink flowers. It came to Peggy as a pass-along cutting from a friend who had received it the same way. That cutting came from a garden in New Orleans. Neither Peggy nor any other of the members of the New Orleans Old Garden Rose Society could ever pin down its name. Even so, she continued to pass it on to her friends.

It's a big rose that needs room to breathe, and after a few years, when it settles into your garden, it just can't quit blooming—heavily in the spring, sporadically during summer, and again in the fall. Its long canes root when they touch the ground, so it's powerful enough to hold back a slope—or encourage a gardener.

A Rose With a Mission Stems From Friendship

One of those friends who received the rose was Dr. Bill Welch, a rosarian and horticulturist at Texas A&M University. After Katrina, an idea struck him in the middle of the night. The 'Peggy Martin' rose, the one that outlasted the storm, could be used to raise money to restore gardens on the ravaged Gulf Coast.

Several online nurseries started selling the rose, originating from Dr. Welch's cuttings, and in the past have donated $1 for each plant sold to the Peggy Martin Survivor Rose Fund managed by the Greater Houston Community Foundation. The money raised helps rebuild greenspaces along the Texas, Louisiana, and Mississippi coast.

Peggy takes comfort in knowing that her rose is helping bring back the beautiful gardens of her coast. Even more, she says, it's a fitting way to remember her parents, two "beautiful, sweet people" whose memory she'll cherish always.

For Southern gardeners, the 'Peggy Martin' rose is popular for being easy to care for and also a good match for beginners. The 'Peggy Martin' rose grows in USDA hardiness zones 4-9, in full sun, and well-drained soil. This climbing rose grows up to 15 feet tall with a 6-foot spread, so it needs to train on some type of support like a trellis or fence. The pink flowers bloom in the spring, and once the plant is established, you may see a fall encore. This rose is semi-thornless—the backs of the leaves are prickly but the canes don't have thorns. The 'Peggy Martin' is very disease resistant.

Where to Purchase the 'Peggy Martin' Rose

The following mail-order nurseries are selling the 'Peggy Martin' rose, and you may even find this species at your local garden center: 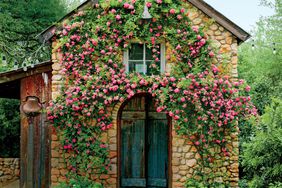 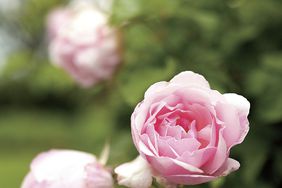 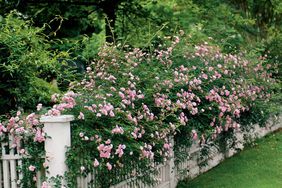