How long would you wait for a Whataburger to open in below-freezing temperatures? For Chris Miller, the answer is four days.

Miller, a Florida native who later moved to Lubbock, Texas, and now lives in Larkspur, Colorado, stood vigil for the better part of a week so he could be first in line when Whataburger's premiere Colorado outpost opened in Colorado Springs on Saturday.

For four days, Miller went back and forth between his post and his diesel pickup truck, only taking shower breaks when his wife, Autumn, could relieve him. At one point, he even shoveled show in front of the restaurant, The Gazette reports.

His determination paid off, and on Saturday at 11 a.m. MST, Miller, rocking a Whataburger scarf and icicles in his mustache, ordered his favorite: Whataburger No. 5, no pickles. He was also awarded a gift basket with a Whataburger water bottle, socks, a stuffed T-Rex dinosaur as well as free Whataburger food for a year. Outside, the sub-zero temps rose to 1 degree.

While he was waiting at the entrance, Kim Stoltenberg from nearby Monument was waiting in the drive-thru line. She too was rewarded with a year's worth of Whataburger for being the location's first drive-thru customer.

"We've been eating Whataburger forever," Stoltenberg, who originally hails from the Dallas area, told The Gazette. "Ate it through college. It's just kind of a part of our family. Our kids, we eat it every time we go down to Texas. So, pretty happy to have it 10 minutes from home. I love the food. I think it tastes great." 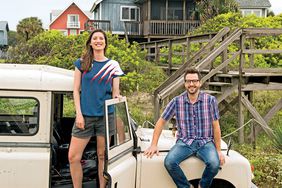