Why Tomato Pie Is a Summertime Classic

Slices of peak-season tomatoes shine in this savory staple.

Sandra A. Gutierrez is a nationally recognized food personality, cookbook author, freelance food writer, and cooking instructor. Her articles and recipes have been published in newspapers and magazines around the world.

Ask me what summer tastes like in the South, and I'll tell you in just two words: tomato pie.

I was introduced to this classic at a ladies' luncheon in Cary, North Carolina, back in the 1990s. It sat elegantly atop a crystal cake stand on a long sideboard. I knew right away that this was no ordinary pie. It merited a place of honor on the table, right between the green salad in a wooden bowl and the chopped-ham sandwiches that sat in perfectly straight rows on a silver tray.

The single-crust tart looked like a quiche with its smooth top, but it lacked the egg-based custard of its French counterpart. Instead, it was crowned with fanned-out tomatoes in different hues of red and yellow. The flaky crust splintered around the edges as our hostess cut into the pie.

I tasted the crispy base, topped with sautéed Vidalia onions. A bottom layer of sliced tomatoes peeked out from under a creamy, salty mixture of mayonnaise and cheese. But it was the topping—a layer of sweet, caramelized tomatoes—that really hooked me.

Historically speaking, the origin of tomato pie is hard to pinpoint. Although this dish has secured its rightful spot in the Southern food canon, many experts consider it a more recent addition.

Damon Lee Fowler, author of nine cookbooks, including Classical Southern Cooking, believes it became widely popular in the 1970s. "None of my community cookbooks from before then or the big Southern food writers of that time—Mrs. S.R. Dull, Mildred Evans Warren, Marion Brown, Grace Hartley—have anything like that," he says. Fowler offered the theory that mayonnaise manufacturers might have come up with the original recipe and included it in promotional materials for the home cook, causing this tasty idea to soon spread across the South.

The first tomato pie recipe in Southern Living appeared in June 1978. Submitted by Mrs. Rose Welsh from Seabrook, Maryland, it included Cheddar and provolone cheeses and called for the tomatoes to be coated in flour and sautéed in hot oil before being placed in the pie.

Since my first encounter with tomato pie, I've eaten versions made with bread or biscuit crusts and shells of puff pastry. I've had miniature ones with equally tiny tomatoes and large pies featuring heirloom selections like Green Zebra and Brandywine. Some cooks kick up the heat with cayenne or chipotle peppers; some sprinkle on toppings of crumbled bacon or crushed saltines.

Whenever I cook my own, I start with a buttery pastry made from scratch and blind-bake it until it turns golden brown. The filling contains mayonnaise and a mix of hand-grated cheeses, including sharp Cheddar. I add pimientos, plenty of parsley, chives, and a pinch of hot smoked paprika.

Truth be told, beyond the requisite tomatoes, cheese, and mayonnaise, it doesn't matter so much what you put in your tomato pie as long as you make one before summer passes you by.

This pantry staple is the key to a good tomato pie because it makes the filling creamy and helps bind it together. We prefer Duke's Mayonnaise because it has a nice vinegary taste, unlike some other brands. If the thought of mayonnaise in a pie doesn't sound appealing, fear not. As with all good secret ingredients, you won't even know it's there.

Cheese is a must, and we prefer using extra-sharp Cheddar. It is aged for months or even years, which gives it a signature bold flavor—and more bang for your buck. Sharp Cheddars also have less moisture than their regular counterparts, which helps keep the filling firm. You can use white or yellow; the color you choose will make the filling appear lighter or darker.

Like mayonnaise and extra-sharp Cheddar cheese, Dijon mustard adds a tangy note to the filling, which helps balance out the sweetness of the tomatoes and the richness of the buttery crust. A touch (all you need is a tablespoon) of this pungent condiment goes a long way. Be sure to choose a smooth, not grainy or country-style, version.

Whether using store-bought or homemade dough, don't forget to blind-bake the crust (bake it a bit on its own) before adding the filling. This extra step will keep the crust from turning soggy as the pie bakes.

Raw tomatoes are naturally full of water, which tends to leach out as the pie cooks, giving it a runny texture—one of the most common conundrums when making this recipe. Luckily, the fix is easy: Roast most of the tomatoes before the pie goes into the oven. Not only does this simple step keep the filling from being too wet, but it also caramelizes the tomatoes, intensifying their flavor. You can even roast them up to a day in advance. When they have cooled, store them in an airtight container in the refrigerator. 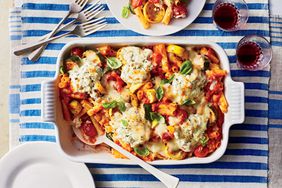