If you aren't following Jennifer Garner on Instagram, you should be. The actress, producer, and co-founder of the organic, farm-fresh baby food company, Once Upon a Farm, didn't join the social media site until late 2017, but since then, she's filled our feed with her signature brand of kindness, good humor, charm, and West Virginia-bred approachability. She pulls you in with silly self-deprecating Reels, dance videos, delightful animal memes, and photos of her golden retriever Birdie, but her "Pretend Cooking Show," which has gained its own cult following and celebrity fans like Ina Garten, is unquestionably the star.

Dancing her way around the kitchen, she's cooked Ina's Lemon Chicken, the Savannah-based Back in the Day Bakery's buttermilk biscones (a cross between a biscuit and a scone), bagel bread, cinnamon rolls, and pretzels, among other things. But like me, Garner is a big fan of family recipes, and a few months ago, she posted a video of her with her mom, Violet, making her grandmother Exie's sweet potato pudding. I decided it would be a good way to use up some of the bushel of Tennessee-grown sweet potatoes sitting in my basement. (My husband's family has this thing about sweet potatoes.)

This dish is a familiar one. It's a regular on our family's Thanksgiving and Christmas dinner tables, but it makes a great Easter side, too. It also tastes exceptional on random Wednesday afternoons. And who doesn't love the way the baking spices make your kitchen smell?

In the tradition of family recipes everywhere, this one is up for some debate. Garner omits the milk and eggs while Violet stays true to the original recipe, which Grandma Exie tore off a utility company pamphlet. Neither method includes added sugar other than the marshmallows you brown on top just before serving. In the interest of research, I decided to make both.

You start by peeling the potatoes. I prefer a vegetable peeler, but both Garner and her mom opted for paring knives. The choice is yours. Then you chop the peeled sweet potatoes into large chunks, cover with water, and boil until a fork glides through with no resistance. Using a stand mixer, blend the sweet potatoes while warm, adding a half a stick of butter and the spices. Blend until velvety and smooth and all the lumps are gone. At this stage, Garner transfers the potatoes, which have turned a deep terra-cotta brown, into a greased baking dish and cooks at 350 degrees until warmed through. While Garner's version was baking, I followed Violet's instruction, adding the milk and eggs to my second batch of the sweet potato and spice mixture before transferring it to the oven for an hour. This method results in a taller, fluffier casserole. Finally, sprinkle mini-marshmallows over the golden tops. You don't need to cover the entire surface; the marshmallows will expand as they brown. But do watch the oven closely—they'll burn in a hurry.

The verdict? To be honest, I expected to favor Violet's more traditional route, but I just polished off my third helping of Garner's simpler, lighter take...in one sitting. 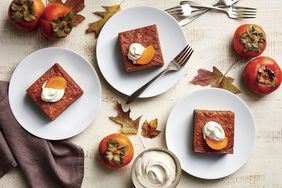 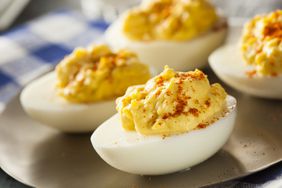 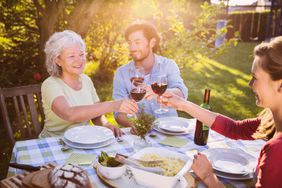 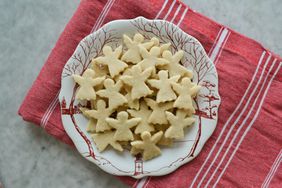