Open any fridge in the South and the doors are stuffed with condiments. Mayonnaise, mustard, pickles, and all sorts of sauces are at the ready for dressings, dips, and sandwiches. The grocery store aisles may be lined with our favorite brands, with loyalty to certain brand names running deep, but homemade versions might settle the debate for good. Made from scratch, a little effort equals condiments packed with tons of extra flavor and tailored to your tastes. Plus, with these recipes committed to memory, next time pepper jelly or tartar sauce is out of stock at the store you'll have the know-how to whip it up yourself.

Sure, you always have Duke's on hand, but it won't hurt to have this five-minute recipe in your back pocket. Made in the bowl of a food processor, this recipe is as easy as combining all the ingredients, drizzling in some oil, and beating until stiff.

Whether on a salad or used as a dipping sauce, a creamy ranch dressing is one condiment to definitely have in your repertoire. It's a simple recipe that can be customized with countless flavor combinations, from blue cheese to avocado or chipotle ranch.

A kissing cousin of rémoulade, this versatile sauce famously originated in a Greek restaurant in Jackson, Mississippi. The spicy condiment elevates everything it's put on, from po'boys to burgers. It's also an excellent dipping sauce for fries, chicken tenders, or fried pickles. No matter how you use it, it's one of those recipes you'll be glad you committed to memory.

The South does barbecue best, but regionally styles vary, especially when it comes to the sauce. Even if you aren't from Alabama, this white barbecue sauce with a good dose of black pepper might become your new go-to. Rather than ketchup, this sauce is made from mayonnaise and spiked with lots of vinegar. It's tangy, creamy, and best served on grilled chicken thighs.

Southerners put pepper jelly on everything for a reason. Perhaps the region's favorite preserves, whether on a biscuit or used as a glaze for a ham, it strikes the right balance of sweet and tangy. While there are plenty of pepper jellies on the market, they can't compare to using the best of the summer pepper crop to make your own.

This end-of-the-season recipe turns summer's bounty into a year-round relish packed with tangy flavor. It's not the kind of condiment you can whip up in just a few minutes, but taking the time to make a batch from scratch pays off and preserves a bit of summer for the dreariest of winter days.

Most Southerners can't live without their favorite hot sauce. Grocery stores sell all sorts of national and local brands, and loyalty to popular hot sauces run deep. But if you have hot peppers in your garden or extras from the farmers market, try your hand at making the classic condiment yourself; you might stop using the bottled stuff for good.

While we've been known to shell out for a jar at the store, it's much more cost-effective, delicious, and fun to make your own pickles. Sandwiches and burgers just wouldn't be the without the sweet and sour bite that only Bread-and-Butter Pickles can provide.

Cajun sauce is seafood's best friend. The mayonnaise-based sauce gets a kick from hot sauce and cajun seasoning. A batch of this sauce in fridge means weeknight po' boys or crab cakes won't ever be boring again.

Tartar sauce is basically dressed up mayo, but that's exactly why it's so good. Start with a base of mayo and you can't really go wrong, right? Add a few capers, lemon, dill, and tarragon to the South's favorite condiment and you have homemade Tartar Sauce in under five minutes.

You don't have to be from Eastern North Carolina to appreciate a vinegar-based barbecue sauce. It only requires four ingredients and because it's essentially a seasoned vinegar, the longer it sits, the more infused and flavorful it becomes. Throw a batch in the fridge now, and thank yourself late.

This recipe is based off of Lillie's of Charleston, a family business that gained a cult following for its mustard-based BBQ sauce. You could order the original sauce online, or take a crack at our version yourself. It's a great regional barbecue sauce to rotate into your grilling lineup.

There's a touch of everything in a rémoulade. With pickles, horseradish, and mustard, it's the winning combination of many classic condiments flavored with a bit of spice. We add a little Old Bay, but the sauce is really a blank canvas for your favorite seasonings, so get creative.

The origins of this sauce may be French, but the South can claim it as its own as well. Mignonette is the traditional bright condiment for briny Southern coastal oysters. The best part? It's only three ingredients. 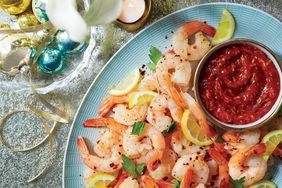 15 Standout Dipping Sauces Made To Go With Southern Seafood

What Is Chowchow and Why Is It a Southern Staple?
We Tasted Six BBQ Sauces and Here's What We Learned