What Exactly Are the White Stripes on the Chicken You're Eating

While many people think of chicken breast as a healthy, low-fat option, thanks to modern farming methods, some of the chicken breasts sold in grocery stores have more than three times the fat than usual. The tell-tale sign? Those little white stripes running through the meat. Those are actually pockets of fat which have popped up with greater frequency due to how chickens are raised.

It's nearly impossible to find a menu in the South that doesn't include at least one chicken dish. Americans eat a lot of chicken, close to 99.3 pounds per person per year, according to the National Chicken Council. That's a massive jump from 1960, where Americans ate 28 pounds per year. As its popularity grows, farmers and companies produce bigger chickens faster than ever in conditions that don't have much to do with how chickens are raised on farms.

In the past (and on smaller traditional farms today), chickens would grow to be about three or four pounds while they ran around on the farm. That's not fast enough for today's chicken-heavy diets, though. That's why modern industry standards have led to fatter, bigger birds in shorter time frames. For example, they have halved the time it takes to grow a chicken to six pounds. The breeding conditions that create those bigger, cheaper birds faster than ever seems to have to led to muscular disorders in some of the chickens, according to Compassion USA. The white stripes marbling the meat in your chicken breast are a symptom of that muscular condition.

A 2013 study of those striped chicken breasts found that the white stripes contain 224 percent more fat, less protein, and more calories than non-striped chicken. Research published in Poultry Science the same year had a similar result: Fat increased and muscle decreased based on the amount of white striping. While this striped meat is still fine to eat, it's not exactly a lean protein. Plus, the meat can be a bit tougher and less flavorful than cuts from healthier chickens.

Unfortunately, according to a 2016 study by University of Arkansas and Texas A&M, found that white striping is becoming more common—and consumers aren't exactly excited. According to the study, 50 percent of consumers stated that they wouldn't buy chicken with noticeable white striping. They may be hard to avoid, though. The researchers tested 285 chickens and found white striping in a whopping 96 percent of them.

While the National Chicken Council told Buzzfeedthatthere is nothing to worry about regarding the white stripes, if you want to avoid the extra fat, look through the supplies at your grocery to find one without it. Or, head to your local farmers market or farm stand and buy your chicken there as they most likely let chickens grow at their own pace without the breeding conditions that likely lead to the white stripes 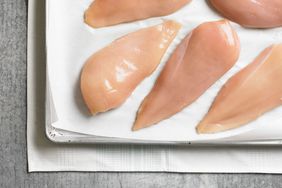