What in the World Are Koolickles?

The origins of this sweet-and-sour treat extend deep in the South.

You may know Koolickles (or Kool-Aid pickles) as a TikTok trend that involves soaking pickles in Kool-Aid, but did you know that the traditions of this colorful snack hack actually lie in the Mississippi Delta?

Yes, these delicacies have origins deep in the South, where they were famous and beloved long before they became a food trend on social media.

The exact origins of Kool-Aid pickles are hard to pin down. Like most good food tales, there are a few different starts to the Kool-Aid pickle, or as it is commonly known, the Koolickle. It is even sometimes called a Pickoola.

Soul Food Scholar and food historian Adrian Miller has a few thoughts on the original Kool-Aid pickle: The first is the strong pickling traditions in the South.

"It wasn't unlikely to see different colored pickled things on a relish tray," he said. "Giving pickles a different color has been around in Southern culture."

Though there isn't much definitive literature pointing this way, it is entirely possible that kids or even adults started making their own versions of fancier colored pickles with Kool-Aid.

Older African Americans my remember putting a peppermint stick in a pickle, a trend seen in the Mississippi Delta, Chicago, and Texas that originated around the 1940s. Iterations of that (sticking a Jolly Rancher and other hard candies) may have also spawned the Kool-Aid pickle trend. This evolved with kids starting to sprinkle Pixie stick sugar and even Kool-Aid on the sour spears. So that's another route, believes Miller.

Regardless of where it started, it has a strong foothold still in the Mississippi Delta region thanks to stores like Bryant's and Double Quick. The latter still sells a half of a big dill Kool-Aid pickle, straight out of the giant two-gallon pickle jar at the counter for 52 cents.

"It is very popular amongst kids," says Kyle Mitchell from Double Quick.

Some people put salt on them to make it a sweet, sour, and salty combination.

Get the Recipe: Kool-Aid Pickles 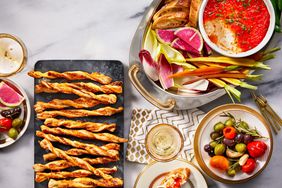 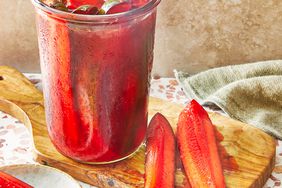