If a volunteer fire department needs new equipment or better uniforms, you can trust the ladies auxiliary to publish a cookbook to raise the funds.

Long before you could pull up an ingredient list on your phone in the grocery store or email a link to a must-make recipe to your sister across the country, women shared favorites through paperback community cookbooks. These cookbooks were more than just a compilation of typed recipes; they were mainly fundraisers and historical accounts of the communities they served.

Many of the cookbooks began as a way to raise money for a common goal. In America, the first of these charity cookbooks was A Poetical Cookbook by Maria J. Moss, which was published and sold in 1864 to subsidize medical costs for Union soldiers injured in the Civil War. Many community organizations learned from Moss's success and began creating fundraising cookbooks of their own. In a time when women had little expectation of a public work life and very few opportunities to use their creativity, entrepreneurship, or business skills outside of the home, they realized the value of their culinary skills. Recognizing a particular need, women banded together under the umbrella of a ladies' auxiliary, gathered recipes and homemaking ideas into books and hit the market, sending their profits to the designated church, hospital, or fire station. The El Paso Cookbook, for instance, published in 1898 by the Ladies' Auxiliary of the Y.M.C.A., was the first cookbook published in that city. According to Feeding America, an historic cookbook project of Michigan State University, this concept became so popular that more than 3,000 charity cookbooks were published between 1864 and 1922,

Fire departments, especially volunteer fire departments, have always been a popular target for help from the ladies auxiliary. Wives, mothers, and concerned citizens team up to raise funds for better equipment, new uniforms, and building improvements, and what better way to raise money than to sell a cookbook? Rather than spending money on high quality paper, glossy photography, and expensive binding, the group opts for the cost-saving measures of card stock covers, comb binding, and quite often, clip-art graphics of fire engines or cooking pots on the cover.

Ladies' auxiliary cookbooks, a.k.a. charity or fund-raiser cookbooks, are still published and sold today and remain valuable sources of information for food historians. They are not only cooking manuals and go-to sources for vintage recipes, but they reflect the food habits of a population in a particular time and record technological advances in society. New foods (such as boxed cake mixes), new kitchen equipment (remember when Teflon coated skillets hit the market?), national food companies, and arrivals of immigrant populations all combined to change the cooking and eating habits of Americans. 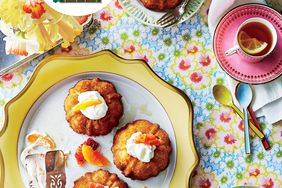