Sweet or savory: That's the question for cornbread, and these recipes solve the problem with delicious ideas for both. If you prefer yours sweet, you will love our Buttermilk Cornbread, with a touch of brown sugar in the batter or our Sweet Potato Cornbread. If savory is more to your taste, try our Southern Skillet Cornbread made with bacon drippings. We couldn't have a cornbread recipes roundup without including our favorite ways to make Cornbread Dressing. There are plenty of variations of classic cornbread dressing, from our new Spicy Cornbread Dressing with Chorizo to a hands-off Slow-Cooker Cornbread Dressing for your easiest Thanksgiving ever. However you like to enjoy your cornbread, these recipes will have you devouring this mouthwatering Southern delight every day.

Our Test Kitchen granted the "perfect" moniker to Ben's recipe, thanks to the extra flavor and superior texture his browned butter affords.

Quickly incorporate the hot bacon drippings into the batter with a fork. When you pour it back into the hot skillet, listen for the sizzle. That sound means your crust will be golden and crisp.

This old Southern take on cornbread is a crisp, lacy brown wafer best enjoyed a few seconds after it leaves the skillet.

This old-school recipe came from Test Kitchen Director Robby Melvin's grandmother, so it's vetted and tested by the best.

Sandwich your favorite barbecue topped with Pickled Peppers & Onions between slices of Sweet Potato Cornbread for a change of pace, or serve alongside your favorite meal as you would regular cornbread. The sweet potatoes add a touch of sweetness.

Be sure every family member can enjoy homemade cornbread on Thanksgiving with this simple seven-ingredient recipe.

Add a bit of spice to your Thanksgiving table with this kicked-up dressing recipe.

You know a cornbread recipe is going to be good when it starts in a cast-iron skillet filled with bacon drippings.

Every Southern cook needs a cornbread dressing recipe in his or her back pocket, and this one is as simple as it gets.

This is one way you haven't thought to enjoy your cornbread yet. Trust us—this uber-Southern bread pudding recipe is worth every last calorie.

This nutty, earthy cornbread dressing is a welcome autumn upgrade to the classic.

Yep, you read that correctly. Our Test Kitchen's Ivy Odom visited Big Spoon Creamery in Birmingham, Alabama, to cook up this Southern-ized ice cream, and you can make it at home.

Sausage adds a hearty element to this easy dressing recipe, which makes it perfect for Thanksgiving brunch.

"Silky smooth and ultra-moist," this favorite cornbread dressing recipe came from Travel Editor Valerie Luesse's Aunt Grace, and every Southerner knows that an auntie recipe is a good one.

For a weeknight shortcut, use store-bought rotisserie chicken in this comforting casserole recipe.

Cornbread Dressing with Sausage and Fennel

Replace mild Italian sausage with spicy for an extra kick in this flavorful cornbread recipe.

Rethink your winter squash with this light but filling dinner recipe.

This entire meal comes together in the slow cooker for your most hands-off holiday ever.

The recipe title says it all: This is our tried-and-true, no-fail cornbread dressing recipe for holidays and potlucks alike.

Remember the cold, layered salads of Mama's luncheons? This fun version can be neatly packed in mini Mason jars for an adorable picnic presentation.

Southerners know that a good cornbread recipe is made even more delicious when paired with milk and a drizzle of honey. This cozy recipe from chef and cookbook author Damaris Phillips will bring you back to Grandma's kitchen.

Two timeless Southern casseroles—squash casserole and cornbread dressing—meet in this recipe that's every potluck-goers dream to find on the lineup.

How could we make old-school chicken and dumplings better? Make it with cornbread dumplings, of course.

Whether she goes by Mimi, Nana, Grandma, or Meemaw, a grandmother's cornbread dressing is simply better than the rest.

Fresh blueberries add a welcome hint of sweetness to this cornbread casserole that you can enjoy from brunch to dinnertime.

Free up some oven space for the turkey and green bean casserole this Thanksgiving and make your dressing with the hands-off ease of the slow cooker.

This one-skillet dinner is cheesy, kid-friendly, and full of Tex-Mex goodness.

We know that adding sugar to cornbread is a hot button issue, but the touch of brown sugar in this Buttermilk Cornbread adds just a hint of caramel-like sweetness that dare we say, is really delicious. Give it a try and you might also be convinced that sugar in cornbread isn't always a bad thing.

It's hard to improve on a classic, but brown butter in the batter adds a nutty richness to this cornbread that takes it to the next level.

Studded with jalapeños, scallions, and corn kernels this loaded cornbread is worth making even if you don't have the same cute corn-shaped pan to bake it in.

With just 4 ingredients, these little rounds of cornbread are designed to be hassle-free. Test Kitchen Professional Ivy Odom likes to eat them loaded up with whatever is on the table, dolloping rounds of this cornbread with dressing, cranberry sauce, turkey, and green been casserole for the perfect bite.

Cornbread is so versatile, it can be turned into dressing, used in casseroles, or even served as dessert, but have you tried adding it to your salad? This recipe transforms cornbread into crisp golden croutons perfect for bulking up any salad.

Wild mushrooms, sage, and thyme add a ton of savoriness to classic cornbread dressing. And the bacon in it doesn't hurt the flavor either.

The iconic trio of soup beans, cornbread, and chow chow hails from the Appalachian Mountain South, and sure each component is delcious on its own, but they're best when served all together.

You might think of brioche when someone says egg bread, but for people from the Cumberland Plateau, egg bread is a thick, fluffier-than-usual cornbread. Mix it up at the next potluck and try this regional variation on the classic. 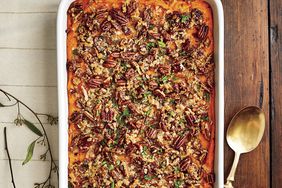 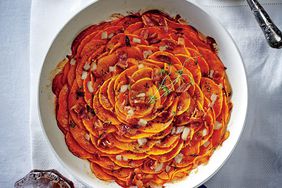 23 Dairy-Free Side Dishes For The Holidays