The Charleston that you see on the show isn’t the fancy hotels and seafood towers often spotlighted in magazines. It’s the Sea Islands, an area where West Africans arrived in America as slaves and formed what is known as the Gullah community. Brown, who is Gullah, tells it like it is. She’ll describe how fish fries were started by slaves who had no choice but to take what was available from the land and water and turn that into sustenance. And when describing her use of garlic powder in a recipe, she’ll explain that her ancestors didn’t always have access to the fresh stuff. Her guests—who include her thrifty Aunt TC and her brassy mother, Patricia—are bold, fun, and refreshingly unfiltered.

This is a show that is comfortable with itself, one that is not afraid to dig a little deeper to teach us something about our history. It’s a breath of fresh air on a network whose slate of stars hasn’t always reflected the diversity of our country. But Brown, whose show is now going into its third season, followed anything but a straight path to get here, and her fight for representation is far from over.

It’s a sunny and slightly breezy Friday in Charleston. Brown, sporting a sharp bob and a shiny manicure, has posted up at her grandmother Josephine’s house, a homey spot in the residential neighborhood of West Ashley, filled with old issues of Ebony magazine and ceramic animals. Brown knows every inch of her matriarch’s kitchen, from where she keeps the garlic powder to where you’ll find the stash of local okra. Family members stream in and out of the house—her mother, her aunt, her cousin Mikey—as Brown prepares okra stew.

It’s a Gullah tradition to make okra stew on Fridays, Brown says, so everyone can gather around and eat a hearty meal after a long week. She grabs a big pot from under the stove; browns some beef until it fills the kitchen with a rich, irresistible scent; and then adds crushed tomatoes, stock, ginger, and fat slices of okra. Her grandmother playfully inquires as to why she didn’t use homemade stock. “We don’t always have time for that!” she responds bluntly.

Brown doesn’t seem to mind the steady buzz of relatives. She was raised by her single mother and grandmother and spent a significant portion of her childhood on Wadmalaw Island, surrounded by the large Gullah community.

It was there that her grandmother insisted on teaching her about Gullah foodways. For that generation, keeping their culture alive involves cooking. Slaves weren’t taught to read or write, so that was one of the few means they had of passing down their traditions. That’s how Brown learned to prepare okra stew, shrimp and grits, stewed lima beans, and pimiento cheese—dishes that are often associated with Charleston’s distinct brand of Lowcountry cuisine but aren’t always credited to the Gullah people.

After college, Brown got a job in social work, and cooking became a way to get through the mental strains of the job. On a whim, in 2014, her boyfriend at the time submitted a tape of her to the Cooking Channel, and she was soon contacted about being a guest for a pilot. The show never got picked up, but the Food Network executives loved her. They said she should go find her unique culinary point of view, and then they would talk.

“The food is at the center of it all, like little branches that connect everything else.”

Then in 2018, she got another call. Her producers had pitched a series to the Food Network that would focus on Brown, her family, and her life in Charleston. This time, they wanted to film a pilot.

Delicious Miss Brown premiered in July 2019. It takes place at Brown’s family estate on Edisto Island. She hosts shrimp boils and fish fries with many of her relatives and puts her Gullah heritage front and center. The food is geared toward comfort rather than Instagram perfection. Kardea Brown bursts with heart.

Gullah cuisine, she proudly explains, is a food of survival. It’s what slaves cooked when they were given only scraps. “This is such a colorful and rich and deep community,” she says. “The food is at the center of it all, like little branches that connect everything else.”

That’s why she takes issue with the growing notion that Gullah cuisine is disappearing due to the lack of written documentation and the destruction of the Sea Islands caused by climate change. Brown insists that her generation is committed to keeping these traditions alive. She points to chefs like BJ Dennis, who are championing this cuisine on a national level. In reality, Delicious Miss Brown is probably the biggest stage Gullah food has ever been given, and Brown understands the responsibility that comes with that.

“I hope to bridge the gap between what people know of Charleston and what is actually represented here,” she says. “I want people to come here and go to the Sea Islands.”

Still, even with a show that averages just over 1 million viewers an episode, Brown, the network’s new kid, feels like she has to work a little harder, whether that’s pushing for advertising dollars to promote the show or asking to be featured at Food Network events alongside her colleagues.

She was filming an episode of her show where she was hosting a supper club and discussing the origins of her dishes. “I started talking about slavery, and people said, ‘We don’t know if we can say this,’ ” she recalls. “I was like, ‘Why not? It’s the truth!’ ”

“Sadly, it is 2020, and we are still not ready to have that conversation,” she adds with a sigh.

So her goal for the next season, which begins filming soon, is to have those in-depth conversations and give people an even more thorough education on Gullah cuisine; African American history; and yes, slavery. Getting her message across in a network-friendly way may not be so easy or straightforward, but she’s up for the challenge.

Sometimes it’s slow going, she says with a chuckle, slurping a spoonful of okra stew, “but we’re getting there.” 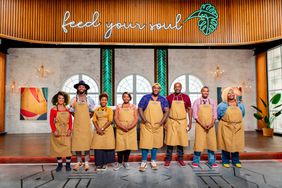 Who's the Country's Best Soul Food Chef? A New Cooking Competition Show Aims to Find Out 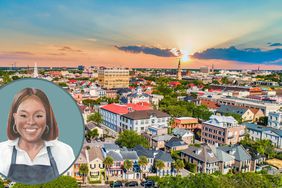