A cast-iron skillet is a prized possession among Southern cooks. Seasoned with years of cooking and loving care, heirloom cast-iron skillets are as valued (and fought over) as Grandma's china and sterling silver. A new pre-seasoned skillet also makes the perfect gift for a young cook. Browse our collection of delicious recipes utilizing cast-iron skillets. We all know how great fried chicken tastes hot out of the skillet, and we love how easy cast iron goes from oven to table with weeknight favorites like Chicken and Wild Rice Casserole and Beef Tamale Pie. These cherished skillets are also great for party appetizers like Cast Iron Salsa and impressive desserts like Pineapple Upside-Down Cake. Great cooks know the more they use their cast-iron skillet, the better it gets. Keep your prized skillet on the stovetop and reach for it often with these recipes.

Enjoy a restaurant-style steak from the comfort of your own home. Easy and delicious, this skillet dinner recipe doesn't disappoint.

This one-dish wonder is the perfect meal for a causal movie night. Similar to a pizza stone, the skillet holds heat well, creating an excellent base for all your favorite toppings.

Give this leek-and-mushroom grits frittata a try next time you're serving breakfast for a crowd. It has a little something for everyone.

Apple pie is a quintessentially Southern treat, and a trusty cast-iron skillet takes the timeless dessert to the next level.

This hearty skillet recipe is packed with fresh vegetables and savory rosemary chicken for an excellent dinnertime meal.

Don't wait until Thanksgiving to make this sinfully sweet dessert. This pecan pie recipe deserves a spot on the table all year long.

Perfect for kids, the foundation of this quick and easy cast-iron recipe starts with pre-made ravioli to keep things simple.

Just as delicious as it is beautiful, this beloved apple pie recipe is sure to impress all of your dinner party guests.

Turn a classic campfire dessert into a decadent cast-iron skillet dip with this simple recipe.

There's something about warm, flavorful fruit in a cast-iron skillet that makes Southerners jump for joy. This ginger-plum slump recipe puts a modern twist on a classic cobbler.

Every Southern cook knows a good hash recipe or two, and you'll be adding this one with russet potatoes, bell peppers, onions, and thick-cut bacon to your list. We suggest you top it off with a fried egg.

This delicious dinner recipe proves that you don't need a deep-fryer to get crispy, golden goodness.

This is the most restaurant-worthy 30-minute recipe you'll ever serve. A tip from the test kitchen: Pork chops that aren't too thick or thin are best in this recipe. Look for chops that are one inch thick—they will be meaty and filling without taking a ton of time to cook.

This recipe blends the delicate flavor of sweet potatoes and green onions with the spicy zest of chopped red jalapeño peppers.

The best part of this chicken piccata is it only requires one dish to make, and we recommend a cast-iron skillet. It will heat more evenly than a nonstick pan, yielding a delicious cutlet that's tender with crisp skin.

Turn your skillet into a Mexican comal, aka griddle, by slowly charring onions, garlic, and peppers in a dry skillet. We like to use this traditional dry char technique because it coaxes sweet, earthy flavors from the vegetables and gives them just a hint of smokiness.

This rustic meal, a company's-coming riff on the old-school chicken-and-rice number, is held together by a tangy gravy flavored with country ham and mushrooms.

All the flavors of a favorite casserole come together in the comfort of mac and cheese. Serve this dish to your family, and it will become a quick favorite.

Top-Shelf Chicken Under a Brick

Recipe: Top-Shelf Chicken Under a Brick

The "top-shelf" in this recipe speaks to the crispy skin, superior flavor, and juiciness of the bird.

One reader called this "the best pork chop recipe ever," and we think you'll agree.

Why fuss with a biscuit-cutter when you can make a giant biscuit in your cast-iron skillet? Slice it up for the whole family.

We lightened up the suppertime classic with perfectly portioned mini turkey meatloaves. Since they bake right on top of the veggies in the cast-iron skillet, you truly get a full dinner in one dish.

The streusel topping on this springy dessert recipe includes Marcona almonds for a buttery, elegant twist.

Our Test Kitchen called this recipe "the burger to end all burgers," and we have a feeling that cooking all the following ingredients with bacon grease from the bacon is why.

If you thought "fried" was the only way to enjoy green tomatoes, let this pie recipe prove you wrong. When baked up with warm spices and sugar, green tomatoes are similar to Granny Smith apples.

Southerners know that all good cornbread starts with a cast-iron skillet and bacon drippings.

This spring treat is the perfect addition to your weekend brunch. A tip from the Test Kitchen: If you're worried that the cake might absorb savory flavors from the cast iron, line the pan with parchment paper.

"Delicious. I've made this several times now and my family just loves it," wrote one five-star reviewer. "The Panko crumbs really add a top crunch that combines well with the cheesy pasta and cauliflower. I must always use the cavatappi pasta now. It's a special dish!"

Instead of fussing with homemade piecrust, this recipe calls for frozen puff pastry sheets, which looks and tastes amazing.

You can't go wrong with this iconic Southern dessert that looks as pretty as it tastes.

Sweet cooked apples are a delicious match for skillet-seared pork chops and onions.

Cobbler is often associated with summer fruits like peaches and berries, but this apple cobbler is full of the flavors of fall.

No rolling required! With these skillet enchiladas, you can layer everything up and serve family-style.

If you've never tried to make a Dutch baby before, this puffy skillet breakfast pastry should be your weekend baking project. This recipe uses savory ingredients like bacon, cheddar cheese, and chopped chives, but you can also use toppings and fillings like fresh fruit and whipped cream for a sweet take.

A cheesy pasta bake is the easiest way to guarantee a happy family at suppertime. Andouille sausage adds a hint of smoke and spice to an otherwise classic baked ziti.

Though kugel is usually make in a casserole dish, the cast-iron skillet is the best vehicle for perfect texture.

A package of corn muffin mix and budget-friendly ground beef come together in this simple skillet supper that the whole family will love. Add more sliced jalapenos to the top if you like a little spice.

Shrimp, couscous, and colorful bell peppers make for a quick and healthy dinner.

This classic Southern side belongs on every cookout menu this summer. 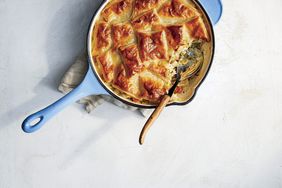 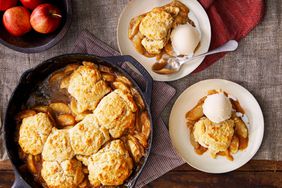