The Battle of Brunswick Stew

Some things are quick. Brunswick stew is not one of them, but the results are worth every minute. You wind up with enough to feed a crowd, or enough to freeze for several great meals to come.

Raconteur and humorist Roy Blount Jr. quips that Brunswick stew is what happens when small mammals carrying ears of corn fall into barbecue pits. It's true that Brunswick stew was once made with a variety of wild game, particularly squirrels and rabbits, but it's now usually made with chicken and pork. For this version, the chicken and pork are smoked for hours—either at home or at a local barbecue joint—before they go into the pot. The vegetables matter just as much. Each cook has a secret combination of vegetables and seasonings, but nearly all agree that corn, butter beans or lima beans, and tomatoes are required.

The good people of both the town of Brunswick, Georgia, and Brunswick County, Virginia, equally and passionately claim to be the point of origin for the eponymous stew.

Some decades ago, Brunswick, Georgia, mounted a 25-gallon iron pot atop a town monument. The inscription declares the pot to be the very one in which the very first Brunswick stew did bubble on July 2, 1898. Georgian Brunswick stew tends to be made in relatively small batches, often in local cafes where it is served as a barbecue side dish.

In 1988, the Virginia General Assembly issued a decree naming Brunswick County the home of Brunswick stew, claiming they can trace their stew back to 1828. These days, stew making in Virginia is often a male-dominated ritual. Men known as stewmasters tend huge cauldrons, stirring the contents with boat oars, cooking up hundreds of quarts to be sold at fund-raisers for community causes. These stews are very thick, often not declared done until an oar can stand upright in the center. Virginian Brunswick stew is served as a main dish with bread on the side.

Bickering over who made it first and who makes it best is one of those (mostly) good-natured battles that will never be settled. Both communities continue to declare their provenance, and certainly their take on the way to make it, to be unassailable. This version incorporates a little of both iconic styles, and comes from a neutral state. 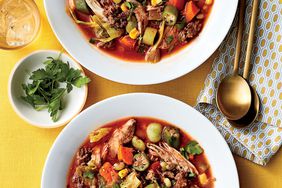 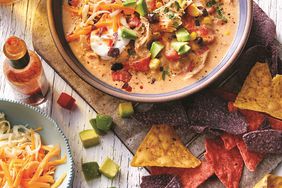 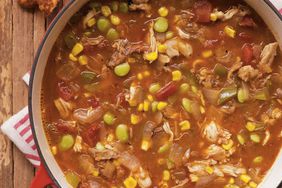 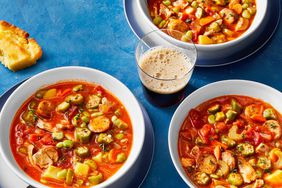