When it comes to entertaining, some things will never change.

In 1972, just six years after Southern Living was founded, the magazine published its Party Cookbook, with a simple subtitle: Complete Menus and Entertaining Guide. The book was written by a witty Chattanooga food columnist named Celia Marks, who clearly understood the art of the soiree. By today's standards, the cover is not attractive—a dark photo of a crown roast surrounded by spiced crabapples and parsley—but it sold more copies than any other cookbook in Southern Living history. Some of that success can no doubt be attributed to the menus and recipes, which cover every kind of party you can imagine (from a He-Man Brunch to a Holiday Reception), but the secret sauce is Marks' advice that still holds up 46 years later. "Hospitality, a synonym for the South, comes from the heart," she writes in the first chapter. "Even the most discerning disciple of etiquette may fall short as a hostess if she fails to bestow this gift upon her guests." She also touches on something modern cookbooks frequently miss: "So often in organizing our entertaining, we tend to forget why we're doing it at all."

That's a fair point as we head into the fall holidays, but not everything in the original Party Cookbook rings so true in 2018. For example, she assumes pretty much everyone is a smoker: "A thoughtful hostess always provides filter and non-filter cigarettes in several convenient places throughout the room." I was also amused to note that men couldn't be trusted with party invitations (something my wife would agree with). "If the husband issues an invitation, it is considered tentative until confirmed by his wife by telephone or note," she says matter-of-factly. But there's a reason well-worn copies of the Party Cookbook still grace bookshelves and kitchen counters, and that's because Marks got the important stuff right.

We tried to keep that in mind with The Southern Living Party Cookbook: A Modern Guide To Gathering (available October 23). It's written by Elizabeth Heiskell, a delightful hostess originally from the Mississippi Delta, who's a frequent Today show food contributor. Though she runs a catering company and has thrown hundreds of parties over the years, Heiskell is all about keeping things simple, festive, and fun. Take the recipe for Hoppin' John Hushpuppies: "If you are ever at a loss when planning a menu, just add a hushpuppy," she says. "I honestly can't think of anything they don't work with. Fried chicken?…Yes! Shrimp boil?…Yes! Steak?…Yes! Enchiladas?…Why not?" She also has some advice that Marks would probably agree with: "If you don't remember anything else from this book, remember this. Friends who come to your home for a party are not there to pass judgment. They are there to enjoy a strong cocktail or a big glass of wine and a nibble. They are your friends and are grateful just to be invited."

Cheers to a happy, relaxing, and festive fall. 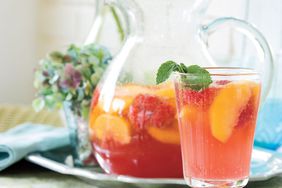