Louisiana's Southern Comfort Eggnog is the Best Store-Bought Eggnog On the Market, So Stock Up

Get your 'nog on.

It's only right that the best eggnog comes from New Orleans, we suppose. Between the Sazerac and the Hurricane and the Vieux Carré, the historic city has a knack for turning out boozy masterpieces. Except this raved-about eggnog we're speaking of isn't a recipe only found in some New Orleans dive (though there is bound to be a hidden gem), but from a distillery that was born there. Ever heard of Southern Comfort?

Created by bartender M. W. Heron in New Orleans in 1874, the distillery has been crafting its whiskey in Louisiana for over 140 years. You might know it by its well-known cocktail recipe, the Scarlett O' Hara, which combines Southern Comfort whiskey, cranberry juice, and lime—but it also happens to hock arguably the most lauded store-bought eggnog on the market.

Yaysayers vouch that it tastes perfectly custardy and way more homemade than other store-bought eggnog brands—without having to actually make eggnog at home. (Because, obviously.) It's thick and ultra-creamy without coming off like a melted milkshake, and it's the right amount of sweet without being sickly or syrupy. It pours out in a cream color that's tinged with a hint of golden yellow, just like your favorite Blue Bell Homemade Vanilla, which makes it extra festive when serving to guests with a splash of whiskey and sprinkle of nutmeg.

Southern Comfort Eggnog…say it, remember it. Because it is the only one worth buying.

If you can find it in your grocery store, consider yourself blessed. It gets swooped up faster than you can say, "Grandma got run over by a reindeer." We suggest picking up as many cartons as possible and serving your holiday party guests this old-school cocktail that often gets left behind in favor of fancier mulled wines and Santa sangrias. Pour it into a punch bowl, and no one will be the wiser about where it came from.

To make it boozy, add 1.5 ounces of the liquor of your choice—bourbon, whiskey, rum, or even brandy—and sprinkle with holiday spices to give it Santa's signature flair. Want to really bring on the nostalgia? Serve in these National Lampoon's Christmas Vacation-inspired moose mugs. Clark would be proud.

No holiday party is complete without festive cocktails, crowd-pleasing appetizers, and good company. Consider yourself covered. 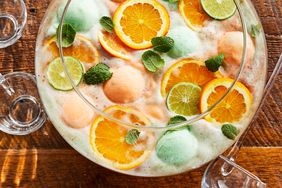 23 Non-Alcoholic Punch Recipes That Are Perfect for Every Party