Once a hot British drink, now a classic Christmas cocktail.

Creamy, decadent, and spectacularly seasonal, it's easy to see why eggnog, a dairy-based beverage, has become a holiday staple. Eggnog usually comes from the grocery store in jug form, only to be doctored with alcohol and garnishes at home. But that wasn't always the case. Here's more about this traditional holiday cocktail and how it became associated with Christmas.

To discuss the history of eggnog, you first need to know where it gets its name. The "egg" half is obvious, but "nog" traces back to its British origins, a word used to describe a strong ale in Old English. A second possible explanation is that "nog" derives from "noggin," a phrase used for a small cup in the 16th century. Finally, the third possible naming origin for this signature beverage is that after it made its way to America, colonists referred to heavy drinks as "grogs."

Eggnog dates back to medieval times when British people enjoyed a hot, milky drink called "posset," which initially did not contain alcohol. It's believed that British colonists brought the beverage to America, where it quickly became popular. English colonists transformed this hot British drink (a mixture of eggs, milk, and ale or wine) by adding rum and bourbon—the spirits of the New World. Rum was more accessible as colonists traded in the Caribbean.

Before store-bought eggnog was an option, it was whipped up at home and served to Christmas guests in large bowls. While several iterations of the original Virginia-style 'nog are available today, nearly all of them involve egg yolks, a stand mixer, and milk, cream, sugar, and alcohol in various proportions.

British posset used ingredients only the wealthy could afford, including eggs, milk, and sherry. Therefore, this drink became associated with prosperity.

It became a part of the cultural canon, even making its way into Shakespeare's Macbeth, as the hot beverage, posset, is the drink poisoned by Lady Macbeth. Eggnog became so popular that it sparked a riot on Christmas Eve of 1826 at the United States Military Academy in West Point, New York. A batch of spiked eggnog spawned a drunken uproar, resulting in what is known as the Eggnog Riot.

After its soaring popularity in America, the colonists solidified its association with Christmas because of easier access to eggnog's ingredients. No longer a drink consumed exclusively by British aristocrats, the milky, spirited beverage started to appear in publications and was a staple at estates like George Washington's Mount Vernon in Virginia.

According to legend, George Washington added alcohol to traditional booze-free eggnog during winters at his Virginia estate, Mount Vernon, increasing its popularity. This boozy take on the drink came to be known as Virginia-style eggnog. It was a recipe containing several different kinds of alcohol. In many ways, you have Old Dominion to thank for your favorite Christmas treat!

Today, eating raw eggs like Washington would have done centuries ago is a good way to contract salmonella, but that still hasn't stopped eggnog's popularity—especially as a holiday drink. So much so that December is fittingly National Eggnog Month, and Christmas Eve is National Eggnog Day. People consume millions of pounds of eggnog each year, so for that reason, we recommend trying our recipe, or The Virginia Egg Council's recipe, which you can make in a microwave at your next holiday gathering.

Eggnog continues to be a classic holiday beverage, but now new variations, like vegan eggnog, are a part of the recipe's history. It's also been the basis for cakes, cookies, and bread, each celebrating this unique cocktail.

Eggnog also has global affiliations, appearing a little differently in each country. Some include a cinnamon and vanilla variation in Mexico called "rompope," homemade egg liquor in Germany, and the egg-less coconut juice-based beverage in Puerto Rico called "coquito." 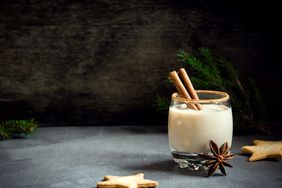 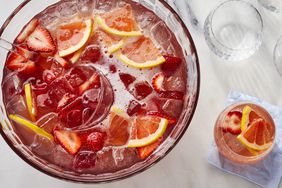 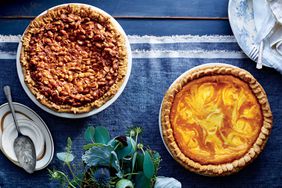 The Most Famous Pies in Southern History 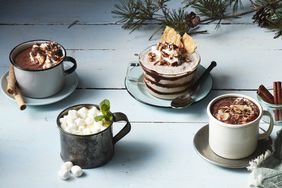