No Southern gathering, whether it be a holiday meal or a Sunday supper, is complete without a homemade pie. We're sure you've had apple, pecan, and pumpkin pies, but there's a whole roster full of other old-fashioned pies you may have forgotten about—Grasshopper Pie, for instance, with its electric green hue. The hotly contested Coconut Cream versus the Coconut Custard Pies. Sorghum, banana split, cherry, bourbon—we could go on and on. Then, there are the veritable depression pies, a true benchmark of Southern ingenuity, proving that here, we are adept at whipping something delightful and delectable out of nothing. These are the classic pie recipes that have stood the test of time. They've been enjoyed by families for generations and will continue to be staples for years to come. The stories they tell and the memories they create are just as important to pass along as the recipes themselves.

For a couple hundred years, the chess pie has been a staple on Southern dessert tables. Refrigerated pie crust helps cut the prep time for this sweet dish.

With roots in the Depression era and World War II, this pie was created to be budget-friendly by Southern women who were "making-do" with what they had on hand. This pie gets its signature tang from buttermilk, a splash of lemon juice, and a hint of vanilla.

Although it just became the official pie of the state of Florida in 2006, the key lime pie has been enjoyed by locals in Key West for over 100 years. Fresh key limes can be hard to find, but this pie tastes just as good when made with the easier to find bottled juice.

Stacked sweet potato pie slices are covered in a sweet, sugary glaze flecked with spices perfect for autumn. Trust us, it's worth the prep time.

The Charleston, West Virginia, Junior League included this Shaker Lemon Pie in its 1974 Mountain Measures cookbook—it's been a favorite of bakers ever since. This pie only requires four ingredients and 15-minutes of hands on cooking, for an easy weeknight pie when the craving hits.

Pecan pie gained popularity when the recipe was printed on Karo syrup bottles, but dates back to the early 1800s. Try one of the many riffs on the classic, from Double-Decker Pecan Cheesecake Pie to our German Chocolate-Pecan Pie.

Just like grandma used to make. What takes this pie from great to show-stopper is the toasted coconut on top. It's the perfect crunchy, nutty, golden garnish for mounds of sweetened whipped cream and rich coconut custard.

What makes this pie the ultimate? It uses a mix of Winesap, Mutsu, Granny Smith, and Honeycrisp apples in the filling. Nestled in between all the apple slices are dried apple pieces and apple butter, for a deep rich apple flavor you just don't get with other pies.

Rooted in North Carolina, persimmons are ripe right around the time the trees lose their leaves in the fall. If you don't have ripe persimmons in your backyard (or grocery store) online frozen purees will do the trick.

If you're lucky enough to get your hands on a cushaw, a winter squash found in the Louisiana area, this pie is a must-have. If you can't find the ingredient, you can use pumpkin puree for the filling.

This decadent pie gets its rich flavor from semi-sweet chocolate morsels. Plus, it comes together in one bowl, for easy clean-up.

Pumpkin pie is easy, classic, and should never be left off the Thanksgiving menu. The secret to this recipe is swapping canned evaporated milk for a Southern Staple: tangy buttermilk.

Coconut custard and cream pies belong in the old-fashioned Southern pie library. We piled this one high with whipped cream and used a pre-made pie crust for ease.

Silky pie filling meets a gritty cornmeal crust, with notes of grass and cane. This Southern-favorite sweetener will turn heads at the next potluck as you set it down on the dessert buffet.

Sure, you can shape it into the flag for a festive Fourth of July dessert, but you can also make it all summer long in numerous other designs. Nothing says summer quite like three pounds of fresh Bing cherries.

Leave it to Southerners to get creative in tough times. This Depression-era pie delivers on the characteristic tartness, while also bringing a hint of vanilla and honey—modern additions, if you will.

Airy, weightless, delicate…that's chiffon pie for you. Our Test Kitchen says this pie is full of old-school Southern class and charm. We have to agree.

Take yourself back to the days of the ice cream parlor with this generous pie. A chocolate wafer crust, strawberry and vanilla filling, and cherries on top deliver on the classic banana split. Plus, as a no-bake dessert, this is your friend on a sweltering summer day.

Cool off on a hot summer day with a slice of creamy lemon meringue pie. It's silky, sharp, fluffy, and light. The real show-stopper is the mile-high meringue, which you'll need to pile on generously with swoops and swirls.

Pecans. Chocolate. Bourbon. This trio brings unexpected layers of flavor and texture and will become a sure addition to family gatherings. A good thing just got better.

Homey, old-fashioned, and delicious are all things we can get on board with. This Egg Custard Pie features a smooth, golden custard lightly dusted with nutmeg for the perfect finish.

One Test Kitchen professional said she could eat this pie every day for the rest of her life. That's mighty high praise. Plus, when it features two classics in one dessert, you know it's going to be irresistible.

There's something about icebox desserts that take us straight back to childhood summers, cooling down with a refreshing treat. Our Lemon Icebox Pie checks all the boxes, from the gingersnap crust to the creamy, tart filling.

Another Depression pie, the Soda Cracker Pie again proves the Southern ingenuity. Since the base of the pie is whipped egg whites, make sure to beat to stiff peaks for maximum height.

Filled with pecans, chocolate chips, and brown sugar, the Derby Pie is one of Ashley Greene's treasured family recipes. Maybe it'll become yours, too.

Before you raise your eyebrows, let us make the case for this classic pie. Our editors call it "as classic as they come" and the ideal combination of tart and crunchy.

Who knew that molasses, hot water, baking soda, and an egg could create such an enduring recipe? What once originated in Pennsylvania Dutch communities quickly circulated into church cookbooks, becoming what we know and love today.

Salty and sweet with a cookie-like peanut butter crust, it's a pie few will be able to turn down when offered a gooey slice topped with Brown Sugar Bourbon Whipped Cream.

Pineapple bits, coconut, and crunchy pecans float in a filling of condensed milk and gelatin, the soft pink hue courtesy of some maraschino cherry juice.

With a salty, buttery crust made from Saltines, and a creamy, citrusy custard filling, this pie has certainly earned its place in the hall of fame. And its creator, chef Bill Smith, raves that it's not only good, but the easiest pie to make.

This pie is a Kentucky tradition. Similar to a chess pie, the filling is a custard made from sugar, eggs, milk, and flour. Our recipe embellishes the classic pie with sugared cranberries and a touch of whipped crème fraîche.

This neon green no-bake pie is sure to turn heads. Inspired by the classic cocktail, it's the perfect pie for fans of mint chip ice cream. It combines a chocolate crumb crust with a creamy marshmellow-mint filling and finishes it off with chocolate mint candy pieces.

Let this pie flavored by a packet of every kid's favorite summer time drink take you back to childhood. Made from a handful of store-bought pantry staples, it's an easy old-school pie to throw together.

Chocolate Silk Pie, also called French Silk Pie, was created in 1951 by Betty Cooper, when she made the pie for the Pillsbury Bake Off. She was a runner-up, but the fact that this vintage recipe is still around is testament to just how good it is.

We'll admit that Bean Pie doesn't necessarily sound the most appealing, but don't judge the pie by its name. This spiced custard pie is not all that dissimilar from a pumpkin or sweet potato pie. The base is made with navy beans, which don't have a lot of flavor on their own, but meld with the eggs, sugar, and warm spices to form a confection so delicious, no one will believe it was made with beans.

This pie combines two of the South's favorite desserts: cream pie and banana pudding. In 1951, American soldiers ranked the banana cream pie as one of their favorites, and we would have to agree with them. The combination of bananas, custard, and whipped cream is nothing short of magical.

Butterscotch Pie is said to be the result of a happy accident. It originated at a creamery in Indiana creamery in 1904 when Sarah Wheeler made butterscotch out of burnt custard and turned it into a pie. Our recipe is no accident, but combines the classic butterscotch filling with whipped cream and a hearty drizzle of homemade Whiskey Caramel Sauce. 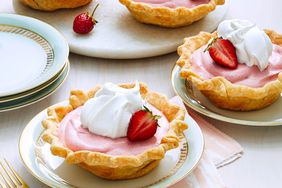 38 Mother's Day Pies That Taste As Good As They Look 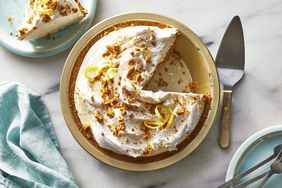