These store-bought chocolate frostings will motivate you to make just the right cake!

Of all the dessert details that can top off a towering layer cake, dozen of cupcakes, or an easy sheet cake, chocolate frosting might be the most indulgent. What can we say, cocoa and sugar are a match made in heaven. As a bunch that isn't too proud to make a boxed cake mix taste homemade, we also aren't opposed to depending on store-bought chocolate frosting to save us a step in super busy times.

Depending on what you're making—from classic Chocolate Mayonnaise Cake to crowd-pleasing Dr Pepper Texas Sheet Cake—there might be a certain store-bought chocolate frosting that makes the best choice. We rounded up four of the most popular chocolate frostings at the grocery store and tested to see which ranked highest in overall taste amongst testers and how each of the differing chocolate flavors would complement your baking endeavors best.

For that reason, we chose an array of chocolate frostings that each had a little something unique. Read on to find the best store-bought chocolate frosting to try now, ranked from testers' most favorite to least.

This one stood out amongst the crowd most prominently in terms of nostalgia, with testers relating this longtime classic spread to memories of Easter bunny cakes made with grandmothers and bake sale cupcakes made with mothers. Creamy and easily spreadable, this frosting is made to the flavor of milk chocolate, which means it is not quite as indulgent in terms of cocoa as it is sugar.

Some testers noted a subtle sour cream tinge underneath all the sugar that seemed to help balance out the saccharine sweetness and make the frosting taste more old-fashioned. This super pliant and sweet chocolate frosting would pair quite well with our festive confetti Birthday Sheet Cake for any chocolate frosting lovers, making for a low maintenance and wonderfully swirled top.

Upon first glance, testers were excited to try out this fudgy chocolate frosting that was much darker in color, smooth, and shiny than some of the other frostings, with one tester noting that the frosting was "wetter" than the others, which could in turn make it more easily spread onto desserts.

Again, this frosting had the notable sweetness of most store-bought frostings, but the fudgy dark chocolate factor made it seem more balanced in flavor, with at least one tester again noting an underlying sour cream note that made it seem more homemade overall.

Here, texture is what makes this particular frosting different from the rest. If you prefer airy and light frostings, this new recipe by Betty Crocker would fit the bill. Testers were pleasantly surprised when dipping spoons into the springy and incredibly fluffy frosting, and most noted that the lighter texture made the chocolate flavor shine through better and the characteristic sweetness less noticeable.

Imagine the super airy frosting used on Publix store-bought cakes, and you're off to a good start. It almost tastes mousse-like upon first bite, which seemed a crowd-pleasing divergence from the usual texture of store-bought frostings and had more than one tester going back for another try. We'd say it makes a quick and complementary substitute to sandwich between and top the denser layers of our Coca Cola Chocolate Cake.

This well-known store-bought frosting initially intrigued testers with a seemingly much thicker, darker, and stiffer appearance than some of the other frostings, and while the richer consistency was commended by some, the lack of spreadability was a point of contention when discussing how easily it would work with something more tender like a cupcake.

The recipe boasts no high fructose corn syrup, which testers noted as a plus, but the saccharine sweetness was said to still be at the forefront of their taste buds. Overall, we could see the denser texture and rich color being a good option for those in need of a sturdy frosting that won't leak or spill out, such as when filling our Sprinkle Sandwich Cookies.

No matter the type of indulgent chocolate treat you're making, there is a store-bought option to help quicken things up. 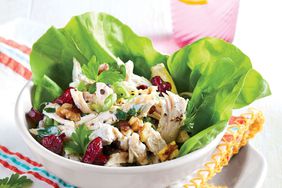