In NOLA, a doberge (DOH-bash) cake is as essential to the event as the presents.

New Orleans-born and bred, TV personality and chef, David Guas, showcases the soul of the South in his Louisiana-style Arlington, VA restaurant, Bayou Bakery, Coffee Bar & Eatery. A two-time Food & Wine, People's Best New Chef: Mid-Atlantic nominee, has garnered national praise in publications like Southern Living, Garden & Gun, Saveur, and Bon Appétit for his roots in Louisiana and his passion to educate others on the importance of its influence on American foodways.

When you meet someone from your hometown, it's customary to ask them where they went to high school. But if you were born and raised in New Orleans, like me, the next question is usually, "Who made your birthday cakes?" This might seem like a weird thing to ask if you grew up somewhere else, but not to us natives. My wife, Simone, who also happens to be from New Orleans, posed the all-important question on our second date. It turns out that we both got the Half and Half Doberge Cake from Joe Gambino's Bakery—and we've been married for 19 years. The doberge cake is a New Orleans birthday tradition.

At a New Orleans birthday party, a doberge (DOH-bash) cake is as essential to the event as the presents. Gambino's, Haydel's Bakery, and nearly every bakery in the city offer their own take on this show-stopping dessert. When I was growing up, it didn't matter if you had pony rides or a whole petting zoo at your birthday party. If you didn't have the right kind of cake, the other kids might talk about you the next day. "Oh, he didn't have a doberge."

The definition of a special-occasion cake, a doberge is made of six to eight thin layers of vanilla sponge cake sandwiched with a custard or creamy filling, then covered in rich frosting. While you can get a doberge in a single flavor such as chocolate (my sister Tracy's preference), the most popular option is the "half and half," which seamlessly combines two flavors into one cake.

After singing the birthday song, everyone would crowd around my mother, the designated cake cutter, to wait for the first slice, which had to be right at the dividing line where chocolate met lemon. The goal was to get an equal amount of both flavors in one piece. Imagine trying to slice a six-layer cake with 20 pairs of eyes on you.

As a kid with a growing interest in cooking and food, I obsessed over this mysterious dessert. I couldn't figure out how Gambino's made it as one cake. I thought they must have used some fancy, specially made pans. Eventually, I wised up. I also became a pastry chef—and now know the secret to the half and half. Spread between each of the identical cake layers is a chocolate custard that covers one half and a lemon filling that covers the other half. The layers are stacked and covered halfway with lemon frosting and halfway with chocolate. My Lemon-and-Chocolate Doberge Cake recipe takes me a full day and requires every bowl in my kitchen—and I make desserts for a living.

My boys, Kemp and Spencer, have always thought they were from New Orleans, but truth be told, they were born in Washington, D.C. However, Simone and I thought it was cute and never wanted them to imagine anything different, so we adopted the customary New Orleans rituals, including doberge cake. Starting with their first birthdays, they got a half and half, made by me. As they grew up, they each settled on just one flavor: lemon for Kemp and chocolate for Spencer. It's interesting how DNA works.

As a way to improve her family's financial situation during the Depression, Beulah Levy Ledner opened Mrs. Charles Ledner's Superior Home Baking from her New Orleans home. Ledner became known for herkuchens, but there was one recipe that would make her a legend in New Orleans history. After some experimenting with the Hungarian Dobos torte, which is a multilayered sponge cake with chocolate buttercream filling, she came up with a brilliant spin-off: a multilayer yellow cake filled with chocolate custard and covered in chocolate frosting. To make it a true New Orleans dessert, Ledner added a French twist to the name, calling it "doberge." The city fell in love with the cake and crowned her the "Doberge Queen of New Orleans." She later sold her bakery and recipes to the owners of Joe Gambino's Bakery, who continue to make the dessert the same way. 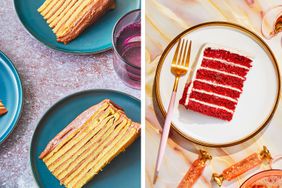 30 Valentine's Desserts That Have Us Seeing Red 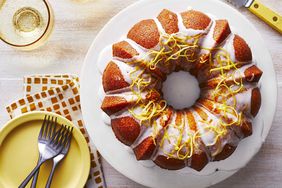