5 Scrumptious Apple Crisps And Cobblers To Make All Season Long

Apple crisps and cobblers are some of the easiest desserts to make, but that doesn't mean they lack any flavor. We like to think of them as the lower maintenance (but equally as delicious) cousins of an old-fashioned apple pie—they've inherited the warm and buttery genes, but not the fuss of making a pretty pie crust. Plus, many of these treats are made with fall pantry ingredients you already have, so a tantalizingly tasty apple treat can be whipped up and enjoyed on a whim. Whether you make a straightforward apple dessert or one that brings other fruits into the mix like blackberry and pear, there's a golden rule to most (if not all) warm, crumbly desserts: They are best served with a scoop of homemade vanilla ice cream. The next time you get a sweet tooth, these apple crisp and cobbler recipes are the easiest way to satisfy it.

This hassle-free treat uses both tart and sweet apples to make golden apple butter that's tastes divine under fresh biscuits. Double the apple butter recipe and store some for safekeeping to smear on buttermilk biscuits and pancakes.

Dreaming of summer but in love with fall? This dessert is the best of both seasons. Tart berries and sweet Gala apples combined with an easy-peasy buttermilk biscuit make for a buttery dessert you'll want to enjoy all year long.

This take on an apple crisp is sautéed for maximum efficiency and deliciousness. Ready in just 10 minutes, our fastest-ever crisp will satisfy sweet, seasonal cravings in a pinch.

An overflowing spoonful of hot apple cobbler and rich vanilla ice cream will never disappoint, especially not with this go-to recipe. It's a clear-cut recipe, with two types of apples, cinnamon, and brown sugar, that's so good, we don't dare mess with this classic.

Granny Smith and McIntosh apples team up with semi-firm pears to make a delicious crisp infused with warm spices. Let your slow cooker take care of dessert with this recipe that's easy as pie (technically, it's much easier). 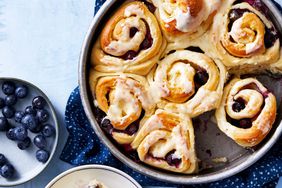