In 1989, an armadillo-shaped groom's cake in Steel Magnolias kicked off a cult following for red velvet. The craze has continued, fueled in part by the red velvet cakes that have graced the Southern Living Christmas cover three times.

If you like red velvet cake, you'll love this fudge.

The trick to creating looping swirls is to gently layer the batter around the Bundt pan with a small cookie scoop. No need to swirl with a knife; it will marble as it bakes. Finish it off with a Snowy White Vanilla Glaze.

Whimsy meets elegance in all five layers of this red velvet-white chocolate wonder.

These snazzy red velvet soufflés are not only eye catching, but drool-worthy desserts that will dazzle any dessert table.

These red velvet brownies taste as good as they look. They are moist, tasty, and swirling with color.

Our red velvet brownies are a bite-size version of the classic cake. Top them with a decadent cream cheese frosting for the ultimate dessert.

This crimson layer cake is the way to anyone's heart, stacked tall for an even more impressive dessert.

Make these sweet snowflake garnishes by tracing snowflake templates on wax or parchment paper with royal icing. Let them dry at room temperature and peel off.

For this majestically elevated dessert, make four batches of the madeleines recipe.

An inspired marriage of two Southern favorites in one dessert, this velvety rich cheesecake is spiked with cocoa and baked in a dark chocolate crust.

Making cookies with cake mix? Genius. This tactic not only gives you the tenderest texture, but the cookies save better than other recipes because of the higher oil content.

There's nothing better for a luncheon or shower than easy-to-serve tiny desserts—not to mention these are beautiful!

Cobblers are the prettiest, easiest way to showcase fresh summer fruit, and this colorful twist happens to be perfect for the Fourth of July or Memorial Day.

With two layers of dreamy red velvet cheesecake sandwiching a soft layer of white cake, this stunning layer cake is the ultimate centerpiece for your holiday celebration.

If you're in a pinch before the school bake sale, this big-batch cake ball recipe uses boxed cake mix to save you time.

Who wants to share dessert anyway? These decadent mini cakes can be prepped a day in advance to save you time the night you're serving.

This masterpiece is a labor of love, but one that's so worth the payoff. A tip from the Test Kitchen: Don't skip the step of adding unflavored gelatin to the icing—this will help to keep it from melting in the summer heat.

No one will believe these sweet treats get their red velvet hue naturally from beets—no food dye in sight! 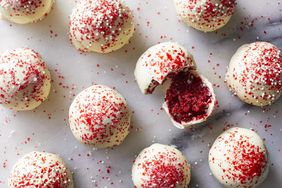 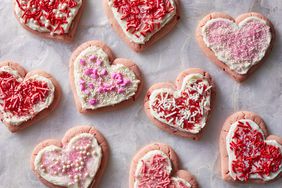